Archives
« Cosplay: Honey I shrunk the MASTER CHIEF. Get it? Wakka wakka.
AT&T awards 11-year-old with $20k for anti-texting while driving app. The kid will just spend it on gumballs! »

New ‘HULK’ standalone flick wouldn’t be until after ‘AVENGERS 2′, plus ‘AVENGERS 3′ teaser? 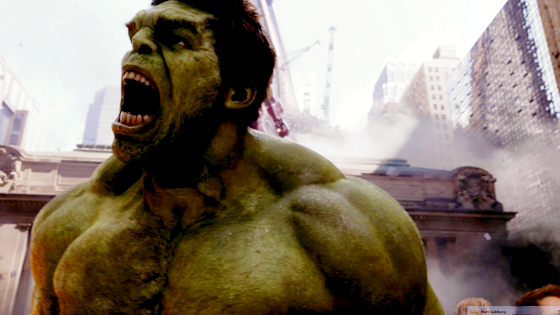 Look at Kevin Feige dropping No Duh! Bombs! Dude is all like saying that a standalone Hulk flick with Ruffalo wouldn’t come until after Avengers 2. No doi! All of us geeks have spent hours scouring Marvel’s Phase 2. This doesn’t surprise me. At all.

After two semi-successful attempts at bringing Bruce Banner’s The Hulk to the big screen, most everyone agreed Joss Whedon finally got it right in The Avengers. However, the argument was maybe it worked this time because Hulk was a supporting character instead of the star. Marvel Studios President Kevin Feige didn’t agree with that and threw around the idea of possibly making another standalone Hulk movie in the future, this one starring Mark Ruffalo who is under a multi-picture contract with Marvel.

The questions are when would that happen and what story would it tell? In a new interview with MTV, Feige said he’s still interested in doing a Hulk movie but that it would likely be after The Avengers 2, making it part of the Marvel Cinematic Universe Phase Three. He also said popular comic book storylines such as Planet Hulk andWorld War Hulk were definitely possibilites. After the jump, read his exact quotes and how these stories could lead into The Avengers 3.

Here’s Feige’s quotes about the Hulk from MTV, separated for dramatic effect.

Do I think Hulk can carry a movie and be as entertaining as he was in ‘Avengers’? I do believe that. I do believe he absolutely could. We certainly are not even going to attempt that until ‘Avengers 2.’ So there’s a lot of time to think about it.

Considering, as far as we know, a solo Hulk film doesn’t even have a screenwriter attached and Phase Two already has four, maybe five movies, before 2015′s The Avengers sequel, this statement was already pretty obvious [He’s also already said as much, I know.] But it does  raise questions of, if Iron Man, Captain America, Thor, the Guardians of the Galaxy and maybe Ant-Man are all doing stuff before The Avengers 2, what has Bruce Banner been doing? Maybe we’ll see something in one of those movies as a reminder, or a larger role in The Avengers 2 to set up the standalone movie.

As for what that could be?

I don’t think there’s a lot that we couldn’t do someday, as the cinematic universe continues to grow and expand and get as big as the comic book universe. ”Planet Hulk’ is a cool story, ‘World War Hulk’ is a cool story. I think there’s pitfalls of continuity-overload, and mythology getting so dense that it almost collapses in on itself [with those cosmic projects]. It happens every few decades or so in the comics. Apart from that, I’d say everything is on the table.