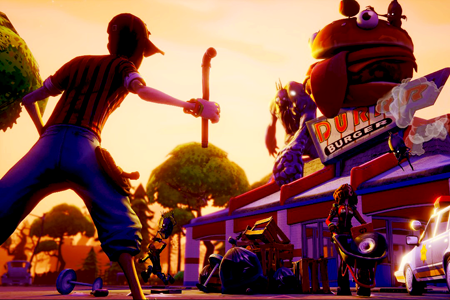 I guess I don’t have to worry about having a rig that can play the first game running Unreal Engine 4. Phew.

Fortnite, which sees characters building bunkers and emplacements to defend against the monsters of the night, was suspected of being a PC exclusive earlier this year when itpopped up on a LinkedIn listing for PC. The listing was quickly changed after we brought it to the attention of Epic Games.

Anyone…excited for this? At all? Wait, Mike Fahey is!

Epic Games’ latest title, Fortnite, is a shooter in which players wait until nightfall for their fortress to be attacked, or venture outside of the safety of its walls to take the battle to hordes of colorfully creepy creatures.

Fortnite is a defense game, in which players carefully bolster their home base against the oncoming horde, planning during the day, and enjoying the fruits of their toil after dark.

Fortnite is a building game, in which players wander about their randomly generated world, gathering materials that can be used to craft anything their hearts’ desire.

“Fortnite is a game we’re making for the gamers,” said Epic’s Cliff Bleszinski as the game made its grand debut at the San Diego Comic-Con earlier today. Familiar sentiment, but this is the first time “for the gamers” has meant all of the gamers, all at once.
Game producer Tanya Jessen calls Fortnite a co-op sandbox survival game, a rather simple label for the most ambitious to come out of Epic Games in ages. It’s a game where players team up within a randomly generated world beset by beastly creatures that, as Cliff put it during the panel, “crave life”. It’s up to a rag-tag band of survivors to scour the countryside for materials, craft elaborate fortresses, and pray they’re enough to hold the monsters at bay when night falls.

For the younger generation of fans, it’s completely different from anything they’ve played from the company they know for the dark and gritty Gears of War and highly competitive Unreal series.

The seeds of shooters past are present in Fortnight, to an extent. During the panel Epic showed off a series of videos showcasing the evolution of the crossbow, one of many weapons available in the game. Using found materials the player will be able to upgrade the simple one-bolt weapon into one that shoots three at a time, or shoots electrified bolts that stun creatures. Or, most impressively, shoot a tight rope line that other players can use to reach higher ground.

So there is something here for shooter fans. When the night falls or during excursions into the wilds for supplies, they’ll be invaluable for keeping the enemy at bay. They’ll certainly come in handy against creatures like the troll, a tiny gruesome critter that Cliff jokingly called “A manifestation of everything on the Internet I hate”.