Archives
« ‘DARK KNIGHT RISES’ TV Spot: Wayne’s Back In The Game
Jonah Hill Is Back In For ‘DJANGO UNCHAINED’, Not Even He Can Ruin It! » 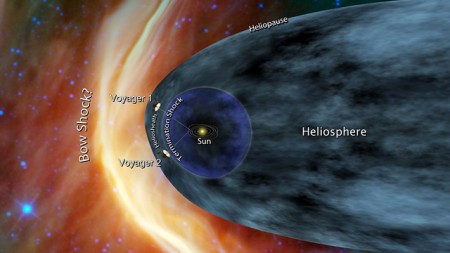 Voyager 1 has been working its way out of our solar system for a long, long, long goddamn time. If calculations by astronomical wizards are correct, it is pretty much there.

It takes 16 hours and 38 minutes for Voyager’s faint transmissions to reach Earth, but the little-spacecraft-that-could keeps on sending remarkable data to NASA scientists. Its latest communication indicated that it has entered into a region of space where the intensity of charged particles coming from outside our solar system has markedly increased. This suggests that Voyager 1, which is 11.1 billion miles (17.8 billion kilometers) away, is truly at the edge of our solar system.

In a recent news release, NASA noted that from January 2009 to January 2012 there has been a gradual increase of about 25% in the amount of galactic cosmic rays that Voyager is encountering — energetic particles that were generated by stars that have gone supernova. And more recently, NASA has noticed an even higher escalation in that part of the energy spectrum. Beginning in early May, they recorded an increase of cosmic ray activity of 5% during one week, and 9% across the entire month.

According to Ed Stone, a Voyager project scientist at the California Institute of Technology in Pasadena, “The latest data indicate that we are clearly in a new region where things are changing more quickly. It is very exciting. We are approaching the solar system’s frontier.”

This change is one of several that they’re noticing, including a change in intensity of energetic particles generated inside the heliosphere (the bubble of charged particles the sun blows around itself).

So how will we know when Voyager truly leaves the solar system? NASA predicts that it will come through a major change in the direction of the magnetic field lines surrounding Voyager. They believe that, when it enters interstellar space, these magnetic field lines will run north-south, unlike its current orientation of east-west. NASA is not sure when this will happen — but given the recent activity, they’re suspecting that it could be quite soon.