Marvel Helps Hearing Impaired Child With His Own Superhero; Plus Hawkeye!

Radical fuzzy shit up in here! A frustrated mother wrote to Marvel hoping they could turn her on to a superhero with hearing impairment. You see, the mother  Christina D’Allesandro had a child who refused to wear his, citing that no superhero had to. Marvel saw the mother’s request, and raised her one.

The kid in question is four-year-old New Hampshire resident Anthony Smith, who was refusing to wear his “blue ear” hearing aid because, he explained, superheroes don’t wear hearing aids. Desperate for help, Anthony’s mother Christina D’Allesandro wrote to Marvel, hoping to discover a superhero that proved him wrong – and that’s where the man with the bow, arrows and penchant for purple clothing comes in (Maya Lopez a.k.a. Echo is another hearing-impaired character in Marvel’s stable of heroes, although unlike Hawkeye, she is completely deaf and wouldn’t benefit from a hearing aid).

Hawkeye, as longtime fans know, has been hearing-impaired since a battle with Crossfire in the 1980s, something that editor Bill Rosemann relayed after reading Christina’s email,  as he told Robot 6:

Tom Brevoort [Marvel’s Senior Vice President of Publishing]  brought up Hawkeye’s loss of hearing back in the ’80s, which spurred me to send a shot of the West Coast Avengers #1 cover to Christina, suggesting that she tell Anthony that not only do superheroes definitely wear hearing aids, but that he could be an honorary Avenger if he wore his.

But the idea of inspiring Anthony didn’t stop there. Rosemann continues:

Lauren Sankovitch passed the email to Nelson Ribeiro in Collected Editions, who then delivered his full-color Mighty Marvel Masterpiece spotlighting the brave Blue Ear. Finally, Tom Brennan reached out to Manny Mederos in the Bullpen, who then drew his awesome team-up shot of Hawkeye and Blue Ear. So just as every one of our comics can only reach readers through the action of many hands, this too was truly a team effort. 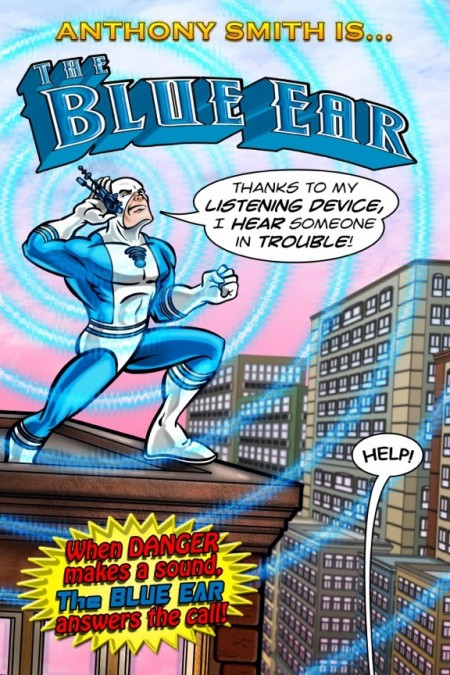