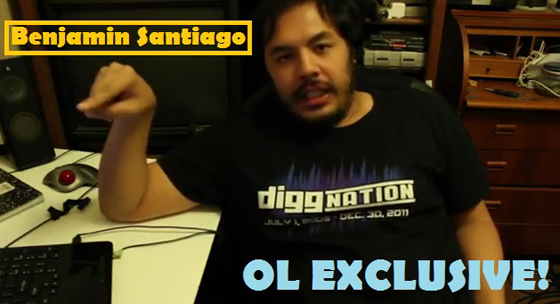 Every now and then a human being is born unto the Earth who has ability beyond the natural. Wielding these transcendent powers, this individual has the ability to do that which most cannot even fathom. Good? Evil? Artist? Warrior? All that’s known for sure when one of these folks drops in is that things are going to change.

I was afforded the distinct pleasure of interviewing Benjamin Santiago, an artist doing the dirty work for those of us who were raised on Super Nintendo and science fiction. This is the dude behind a wonder-trove of visual delights, FANTOMA.ORG, and a slew of ill videos.

Hit the jump and check out this feature with Benjamin Santiago. Not only did he answer all of my wacky questions, but he also made an OL EXCLUSIVE VIDEO!

At the time of my writing these questions, it’s late April 2012. How would you describe yourself at this particular junction in time/space. Who are you? What’re you about and how did you come to be about it? Why’re buffalo wings so fucking tasty?

I’m basically a nice, non-terrorist, way less intelligent version of Ted Kaczynski. I probably got that way from reading all the books about UFOs and cryptozoology in my elementary school and being exposed to Akira at a very young age. More generally I like antiquated video games, hard, semi-mystical sci-fi, and cute girls with bad fashion sense.

I don’t know the answer to the last one, but I think if you put your sunglasses on backwards and frost your tips into so many diving rods like the great mystic Guy Fieri, I’m sure the answer will make itself known.

Anyone who gives even the most cursory of (honest) glances at your work is bound to see that you’re an ardent multimedia artist. Is this interplay between media forms a conscious decision? Why not stick to just one art form?

The main deal I’ve come to realize is that I’m interested in creating worlds. Not in a Will Wright, semi-megalomaniacal way (no beef), but more because reality can get pretty boring.

Ultimately what I do could be channeled through telling stories around a campfire, to making video game-like things, to talking to myself in line for a nice sandwich. The different ways I can make those worlds (drawings/music/whathaveyou) I’m starting to see more as conduits than skills. Although I want to focus more on drawing and animation in the near future, I can’t really help but be interested in mediums that are relatively young and don’t have so many conventions like film, programming, or podcasts.

Of all your various projects, about which are you most excited? Is there anything on the horizon that you see as having the potential to blow doors off hinges? What’re you hoping to accomplish with your work?

What I’ve been putting most of my mental energy into is FANTOMA.org (which I’ll talk more about in a second), I don’t know if it will blow doors off any aforementioned hinges (I would do it even if it didn’t) but I think I’m probably most positive about it and hopefully others will be in into it because of that. It also combines a lot of my interests so I’m hoping it will provide a more interesting answer to “what do you do”?

I don’t know how corny it sounds, but I really want to make magic. There’s that moment in a game like…Mario, Zelda or Metroid (at least earlier games in the series…ooooooooooooooooooh snap) when you discover a secret that changes the nature of the game (The first time you discover that you can walk on the ceiling in level 1-2 of Super Mario Bros. comes to mind). I’d like to bring some form of those experiences to reality, and I’m trying to just keep getting closer to that.

Other than that, I’d like to find ways to actually help people…since art can feel a little ephemeral at times.

I’m particularly interested in the work you’ve been doing with Fantoma.org. Could you provide the OL faithful with a brief explanation of this endeavor? Is there any chance you could repossess a noncorporeal entity just for us?

FANTOMA.org is website and webseries dedicated to the investigations of myself and my colleague Joseph Sarcophagus (who looks uncannily like me). We investigate ghosts from the perspective of already knowing (and being able to clearly show) they are real, and not trying to make dust balls or audio anomalies into sentient presences. He does a lot of the research and I create the devices and software, as well as edit the footage/create the website.

FANTOMA is an acronym for The Foundation for the Advancement of Noncorporeal Technology and Occult Media Advocacy.

I’d have to check with Joseph to see what we could do but we’d definitely be down to figure out ghost-casting of some type. We once did a performance where we allowed a ghost to possess Joseph and ask the audience questions about the living world, we called it a reverse seance.

I’ve often found myself fantasizing about quitting my job so that I can write all damn day, but then I realize that I like being able to pay my rent. In your estimation, how does one balance artistic aspirations with pragmatic responsibilities?

I’ve been trying to figure this out myself, and it seems like a lot of people are, which is pretty comforting. I’ve fantasized about the same thing and shorthanded it into the term “Radio Flyer”-ing myself after Joseph Mazello’s makeshift aerial device in the movie of the same name.

The way I’ve tried to rationalize this lately is that working on things that are for money are really investments in your art, whatever that art be. Also I try to read about people I admire a lot…there’s a really interesting legend about Joseph Campbell at one point where he got semi-Unabomber and lived in a small house and just read books for 12 hours a day for 5 years.

(I’ve been really into the Unabomber/Ted Kaczynski since I saw The Net a few months ago).

Thus far, what’s been your most enlightening moment as a creator? What’s been the most abysmal of nadirs?

When I got into Cooper and the first year there were pretty real. I’d always been “the kid who draws good” in high school and grade school, and people had recommended I try to apply to Cooper Union (they accept a small amount of people and it’s a full tuition scholarship if you get in). When I got in, I started to realize, not really consciously, that I could possibly do art for real. It was also a school full of the “good drawers” from their respective high school which was fun.

One of the sadder/weirder experiences I had was this one critique I had in a design class where Chip Kidd came as a guest, to look at what we were working on. I was going through a period where I didn’t feel I needed to justify all my decisions, which is not the coolest thing to some design teachers. Anyway, we got up to my work and it was this little book I made and Chip Kidd looked at it, and partly because I couldn’t explain it well enough he asked me “if I was taking my medicine”.

It’s way funnier in hindsight, but it was during that semester I got a little more cynical about graphic design.

Lately I’ve been really feeling this podcast called The Bone Zone. It’s kind of like a really absurd version of a regular morning drive-type radio show, and the dynamic between the hosts is really good.
I saw the movie Hausu recently, and that’s probably my favorite movie at the moment.

As far as art, I’m really into Cory Arcangel, I saw Super Mario Movie that he did with Paper Rad and that was pretty dope. Also his solo show at the Whitney was pretty good. I really like what the people who make OpenFrameworks are doing (Zach Lieberman, Theo Watson and co. I think you guys posted the eyeWriter a while ago which Zach Lieberman worked on).

I haven’t been into too much music lately, but the new Death Grips seems really exciting. Frank Zappa is a perennial favorite, also as a guy, not just a musician.

My favorite actor is Jeffrey Combs…I don’t really have a desire to be famous, but I’d like to be whatever echelon you’d need to get on to be able to work with him in some way. He’s tied with John Noble.

Mr. Santiago, you’ve been lurking around OL for a few years now. What drew you to the site? To what force should we offer blood sacrifices so that you continue to be a formidable presence in the comments sections?

I came across Caffeine’s reviews of Dexter (I believe it was season 5) on the Mishka Bloglin pretty much by chance I thought they were really funny and well written. I wrote some long boring comments on them. One of the reviews mentioned OL and I discovered there was a whole blog of this stuff from you guys. I also don’t really read much of the internet these days, so it’s cool that you guys distill the good shit.

Benjamin Santiago has forfeited a life of art for a career as a professional wrestler. Describe — and name — your finishing move.

I’d only work on my boobs, I’d try to get those huge Captain America boobs that look somewhere between a Charles Atlas fantasy and two ciabattas squished together. I’d also try to gain extremely dexterous control over them. My finishing move would be to stand atop the turnbuckle, and spread my boobs apart triumphantly to the crowds applause and to the dismay of my dazed opponent. I’d jump from the turnbuckle and contract my pecs together right as I got to my opponent’s head. I’d call it the T-Job.

Anything else you’d like to share? Life philosophies? Intoxicated ruminations? Half-baked interpretation of Blade Runner (I’ve conjured more than a few of those)? This is your spot to say whatever you’d like.

I will leave it mostly to the video that will hopefully be below this sentence in the final incarnation, but I always really liked Frank Zappa’s advice to aspiring children and musicians (it helps to imagine him saying it).