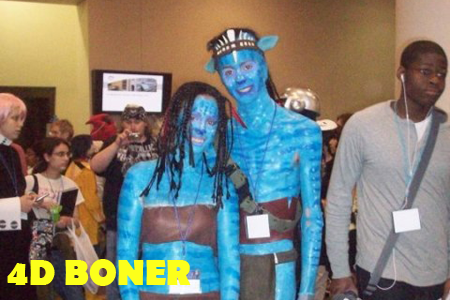 The sequels for Avatar  was supposed to start dropping on our futile simian brains starting in 2014. They would herald the unfurling of the fourth  dimension in cinema, and allow James Cameron to ride a pile of baby corpses all the way to his secret base on Mars. The problem with mastering the 4D is that it takes some time, and it appears that Avatar 2: I See You Ethnographic Stare  is going to be a smidge late.

Indeed, at a Titanic 3D screening early this year, Cameron’s long-time producer Jon Landau said that the first Avatar sequel is likely four years away. Now, in a new interview promoting Titanic 3D, he offers a little more about the Avatar sequel, saying that 2014 doesn’t look likely, but that things are underway.

In an interview with Empire, Landau compared the planned underwater sequences in Avatar 2 with the floating mountains in Avatar, saying that it won’t be the bulk of the film, but rather something that the characters experience here and there. He also said that Cameron’s recent dive into the Marianas Trench is “a science expedition,” but one that will likely provide inspiration for further movies, with the implication that Avatar 2 could reflect his own underwater experience.

As to when we’re likely to see Avatar 2, the producer said,