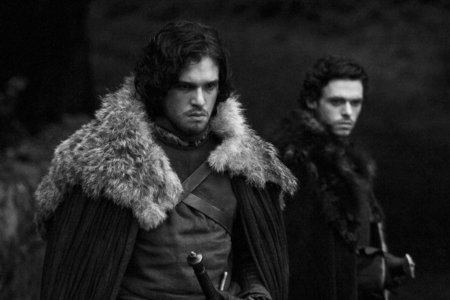 I miss me some Game of Thrones. At least once a Sunday I mention this to OL’s programmer as we sit down to watch television, and while I think he agrees he’s definitely tired of hearing it. I see the hate in his eyes. Or is it lust? Or both? Anyways!, some good Game of Thrones news. They (may) be filming the third and fourth season back-to-back.

The second season of HBO’s medieval fantasy drama won’t debut until April, but one persistent rumor that’s been floating around suggests the network’s already making plans for Seasons 3 and 4. According to “sources,” HBO plans to renew the show for two more seasons, which may shoot back to back.

Although the first two seasons have each been based on one book of  George R.R. Martin‘s popular  A Song of Ice and Fire  series, TV show creators  David Benioff  and  D.B. Weisshave  already said  that the third book,  A Storm of Swords, “will not be a single season. Therefore, if the show really is continuing beyond its next season, it actually makes a lot of sense for the network to pick up two seasons. If you’re already familiar with the books, I give you one guess as to where they’ll put the break between Seasons 3 and 4.