WB To Reboot Batman After ‘The Dark Knight Rises.’ Also JLA Movie For 2013. 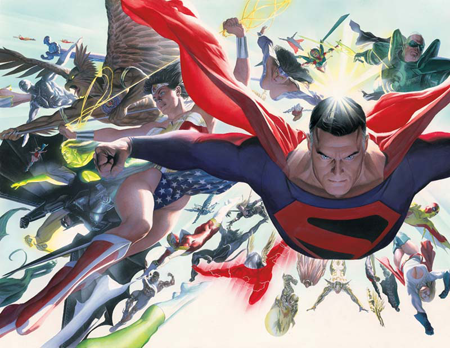 We all know it’s coming. It is the dark, depressing underbelly of Christopher Nolan finishing off his bonerfying Batman trilogy. We all know that the moment he wraps on the son of a bitch, and the moment we gaze upon its guaranteed (GUARANTEED) resplendent glory, we’ve seen the last of the Nolanverse’s take on Bruce Wayne.

This week in the LA Times, the new WB Guru Leader Hivemind commented on this inevitable change.

Batman will be reinvented, but!, with Nolan producing.

[The LA Times Piece] also confirms that Christopher Nolan is going to be done with Batman after The Dark Knight Rises, and presumably Christian Bale will go with him. So where does that leave Batman? The new WB leader says,

We have the third Batman, but then we’ll have to reinvent Batman…Chris Nolan and [producing partner and wife] Emma Thomas will be producing it, so it will be a conversation with them about what the next phase is.

It’s inevitable, sad, and I guess I can’t monetarily argue it. At least Nolan is giving us a succinct trilogy that we’ll be able to rub our balls and ovaries and other junks on for years.

Oh yeah!, they’re also making a JLA movie. You can literally hear (it sounds disgusting) WB shitting their pants about the possibility that they’re missing an opportunity with the superhero team-up flick that Marvel is seizing upon with the Avengers.

In a piece following up on the profile published yesterday, the LA Times directly addresses WB’s plans for various hero franchises. The key fact is that Jeff Robinov really does want a team movie – Justice League – “on the big screen in 2013.” And he says a script is in the works, along with the Flash script that has been in development for some time and a Wonder Woman script. (I’ve had independent confirmation that the film is in development, too.)

Good luck with that! I have serious doubts about Marvel being able to pull off that CORPORATE MOVIE COMIC BOOK SYNERGISTIC WET DREAM MARKETING DEVICE that is the Avengers movie that they’ve been building towards for a couple of years. To the fucking detriment of their other movies – or at least Iron Man 2. DC trying to pull it off, I hope understandably, also doesn’t engender much confidence in me. Especially with what feels like them rushing to do it.