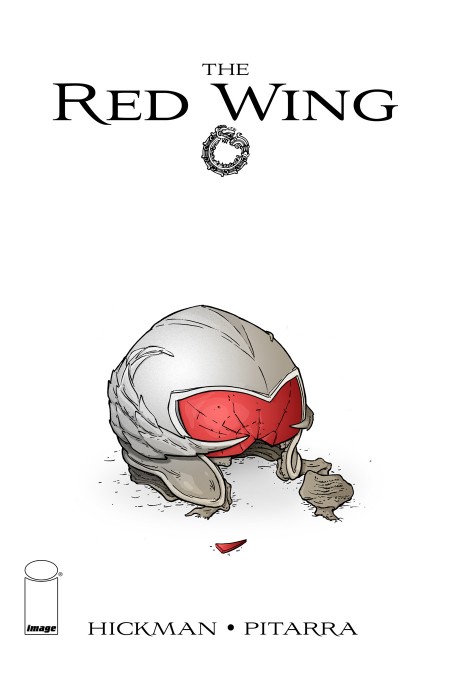 Jonathan Hickman is a resident god amongst the Brothers Omega these days. It may not be forever. For much as it occurs on the Mountains of Olympus, Gods can fall. Just ask us about Mark Millar. But right now he’s spitting prose-gold, and he’s teaming up with Nick Pitarra to bring us ‘The Red Wing.”

Written by Hickman, with art by amazing newcomer Nick Pitarra and colors by Rachelle Rosenberg, THE RED WING marks Hickman’s first creator owned work since the conclusion of the critically acclaimed A RED MASS FOR MARS.

“Nick is going to really surprise some people,” Hickman said. “When the art for this starts hitting the web, and then when the finished product shows up in stores, many of them are going to wonder where this guy has been hiding. Nick’s a very hungry, special, special talent. I consider myself fortunate to be working with him.”

Set in a future where the best fighter pilots in the world not only have to master their craft and perfect their skills, the heroes of THE RED WING also have to learn how to navigate through time. Described by Hickman as “the greatest battle in the history of the history of three worlds,” the four-issue miniseries is but the first concept to be mined by Hickman & Pitarra as part of Hickman’s ongoing “PLUS!” project.

“Well, I’ve been promising I’d get to this for over a year, so now it’s time,” Hickman said. “We’ll start with THE RED WING, and then I’ll be writing and drawing something called, FEEL BETTER NOW, before Nick and I move on to our next exciting project. We have a busy, aggressive slate of exciting stories to tell, and, like I said before, it’s time.”

“It’s a real privilege to be working with Jonathan and the incredible team he’s assembled for THE RED WING,” added Image Comics Publisher Eric Stephenson. “Since his comics debut with THE NIGHTLY NEWS, Jonathan has been one of the most unique and visionary voices in contemporary comics, and after hearing what he has planned for THE RED WING and the rest of the PLUS! series, I can guarantee you he’s not planning to rest on his laurels anytime soon!”

We both know I have a priapism about this shit. Hell yeah.