Archives
« WB To Reboot Batman After ‘The Dark Knight Rises.’ Also JLA Movie For 2013.
DEFEAT. 027 – Stories of the House Millar »

First Image of Mercury From An Orbiting Spaceship. Ever. 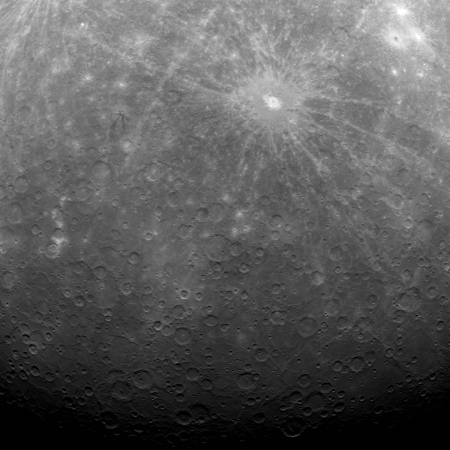 Drink deep in the glory of the first picture of Mercury ever from an orbiting spaceship. Emphasis on orbiting. The sexy image features a cavernous pockmark impact crater.

The picture is dominated by the crater Debussy (named after the composer, who wrote “Clair de Lune”, apropos of nothing, I suppose*), an impact crater about 80 kilometers (50 miles) across. It’s a rayed crater, with plumes of ejecta leaving those long, linear features across the planet.

This image is the first ever returned from a spacecraft orbiting Mercury, but MESSENGER has already taken hundreds more, and  thousands are planned during this commissioning phase (when the various instruments and spacecraft are checked out). The real science observations begin April 4.