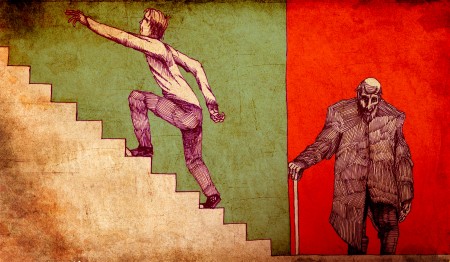 Hands still shaking with the exuberance of success, the glory of having accomplished one of the oft-revered life milestones, Daryl struggled with the latch on the gate of his parents’ sickeningly picturesque white picket fence. Sandwiched between a set of choice words for the gate, Daryl murmured, “Yeah, I have to call them. I’d be pissed if either of them hesitated in telling me about the first conquest.” Finally admitted to his own residence, the champion ran through his front door, never noticing the extra car in the driveway.

Parents already in bed, victims of a spiritually unfulfilling forty hour work week, Daryl made his way towards the kitchen phone without any fear of interrogation. Luckily, parents only have the chance to ask those annoying questions of adolescents (“How was school?” “Was it a date?” “When do report cards come out?” “What’s that smell–is that marijuana?”) when they’re actually conscious. Knowing that he wouldn’t be subjected to any mid-call personal intrusions, Daryl picked up the phone and began dialing away. He was four digits into 8-Bit’s number when he heard the dial tone killed with a *click*.

At the other end of the cord was Gramps, looking uncharacteristically grim. Taking the receiver from his grandson, Clark Millar delivered the news. “Daryl, I don’t know who you’re about to call…But 8-Bit and Riff got jumped. It’s pretty bad, they’re both in the hospital right now.”

“What the hell happened?”

“A friend of mine gave me a phone call. Listen, Daryl…” As Gramps started to pacify Daryl, he had to pause. Looking into the eyes of his descendent, he saw the same fiery devotion that he had only seen in the mirror. There would be no appeasing Daryl at this point. And so he did the only thing that could be done, the only thing appropriate for the situation.

“Put your coat back on. We’re going to the hospital.”

Two stories from the house of Millar made their way through the hospital, never heeding the words of receptionists and nurses and other personnel to “Get back here! You have to sign in! You’re not allowed in there!” Daryl and Gramps weren’t trying to be rude, it’s just that the nature of their mission didn’t allow them to hear the squawking of those entrusted with enforcing formalities.

Paperwork is great for creating jobs, but is otherwise only an inconvenience.

Too impatient for the elevators, the Millars took to the stairs. It was a rapid ascension, even for the elder statesman. While inarguably aged, Clark had a tenacity to him only attained by surviving war. His body was broken, the knees and the shoulders no longer moving with the fluidity of youth. But in place of functional bone-hinges, Clark Millar had an indomitable spirit. It wasn’t quite as strong as his grandson’s, but it’d be two more days before he knew that.

Nevertheless, Daryl rammed into the door at the top of the stairwell, flinging it open into the unsuspecting hallway. Whereas Daryl’s momentum sent him stumbling towards the rooms of his injured comrades, Gramps had to put in a little extra oomph! to get through the door before it slammed shut on the return. In the clear, Clark grabbed his side as he determinedly kept up with Daryl.

Daryl should have continued. In fact, his gut told him to keep moving, to follow the path of least resistance. But he didn’t. In fact, at this point you might be inclined to say he couldn’t, as the wheels of destiny were spinning, put in motion by the dual-activators of having turned a girl into a woman and having friends in need.

Daryl was preparing to change the world so that he could fit better within himself.

Without a trace of reluctance, Daryl approached the authority. “How is he? Can I see him?”

The Lieutenant laughed. He took a few seconds to size up Daryl, trying to figure out how such a babe-faced teen could work up the nerve to question a man of his ill-repute. After looking over his shoulder to make sure no eyes were wandering, Lieutenant Buckley took a rip from his flask. “What’s the deal, kid — you sprout a few fuzzies on your peaches or what?”

“Listen, you drunk fuck, I don’t have time for this! Is Riff in there or not?!”

The Lieutenant, drunk on power and alcohol, faltered backwards. He was dumbstruck. Once he regained composure, he made his move right towards Daryl. “Now lissen’ere you little bastard! If my son didn’t spend so much time with you and that four-eyed faggot, he’d never have gotten into this mess!”

The Lieutenant wound up a fierce backhand. En route to Daryl’s nose, the blow was stopped halfway through its trajectory. By a callused hand whose muscles held memories that harkened back to a stretch of years in which a machine gun was clutched. “Don’t even try it, you spineless sack of shit.” Gramps smiled. “If it weren’t for Daryl & 8-Bit getting him out of the house, your son would’ve been put in that hospital bed a lot sooner. Now get out of my face before I lay you out.”

Gramps pushed Lieutenant Buckley back from whence he came. Knowing that their energy could be better expended elsewhere, he redirected his grandson. “C’mon, let’s go find your buddy 8-Bit. We can visit Riff later.” And with one final, scrutinous glare towards the big man with the badge, Gramps ushered Daryl away.

“I have to do something.”

Gramps kept his eyes on the road and nodded. He knew what he was supposed to say, the response that society prescribes for grandfathers dealing with revenge-minded grandsons. It’s a prescription of inaction. A heavy dose of taking the high road.

But after hearing 8-Bit describe the assault, Gramps couldn’t possibly disagree with Daryl. Not for a single second. Because Clark Millar was a man of principle. And as such, he knew that taking the high road didn’t exist when it came to defending friends. Inaction would be impossible – the best idea was to find the right course of action.

Casually turning the wheel, Gramps agreed. “Yeah. Seems as though those goons really messed up your friends. Real bad. Hell, 8-Bit was rambling about a mysterious figure and…how did he put it? Seeing the literal face of destiny? Was that it? God   only knows. That little peanut’s brain was probably still spinning when we saw him. Poor kid.”

Daryl rolled down the passenger-side window. He let the autumn air smack him in the face, but it was pointless. A forty-five degree gust isn’t enough to cool off blood. Not when it’s boiling. Daryl rolled the window back up.

Gramps continued. “So ya tell me, ‘I have to do something.’ That’s easy to say. And it’s also easy to dismiss. As your grandfather, I’m supposed to tell you to forfeit your animosity. That, somehow, by not doing something, you’re actually doing something.” A pause. “I don’t know how that works.

“The truth is that you’re at a crossroads, Daryl. You’re a great friend and a great human being. Only you can decide what the right thing to do is. But you’re going to have to decide, one way or the other.”

As the car pulled into the driveway, Daryl made his declaration. “I’m going to do something.”

“I thought you would.”

“Then you do it again. But second time `round, you don’t do it half-assed.”