Stan Lee Confirms The Thing Has An Orange Dong. Seriously. 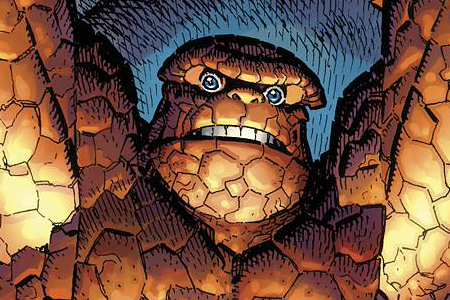 Oh come off it. You know when you were a teenager, with your hormones giving you boners in Geometry class and your jacking off to .gifs you downloaded in AOL Chatrooms that you loved the speculation regarding the Thing’s cock. It was hilarious to you in Mallrats when the question was raised to Stan Lee.

Stan Lee made this determination in response to a question in a — get this — interview with Vanity Fair. Writer Eric Spitzangel, who confessed his fanboy leanings at the head of the piece, just could not control himself and invoked Lee’s memorable appearance in Kevin Smith’s Mallrats, where a violently nerdy character put the question to the Thing co-creator himself. Lee declined to answer the question in the film, but kudos to Spitzangel for wearing the old man down more than 15 years later.

“I guess common sense would say it was made of orange rock too,” said Lee.

Never one to let a perfectly sensational remark go to waste, Lee doubled-down on the shock and awe and confirmed that Reed Richards — the elastic superhero also known as Mr. Fantastic — is also in possession of a mutated phallus.

“I always thought it was more interesting to think about Reed Richards. As you know, he had the ability to stretch, and sexually, that would seem to be a great asset in many areas,” said Lee, as only he can.

Two of the touchstone questions of my generation. Finally answered. I’ll be able to sleep at night.