Wonder Woman TV Show Is Going To Be Goofy Rom-Com. 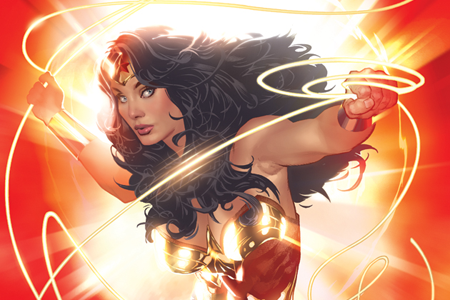 I’ve never really had much investment in Wonder Woman. Outside of her storyline playing off of Clark in Kingdom Come, and her bad ass neck snapping of Max Lord, she’s never done much for me. This is probably good news, given the details that have come out about the forthcoming Wonder Woman television show. If I was a fan of hers, I would probably be vomiting up blood somewhere.

Head inside for the details.

Brendon Connelly dissects the pilot’s script so we don’t have to:

This new Wonder Woman does feature a lot of elements and characters from the comics continuity:

There’s a scene with comics character Etta Candy, a role that’s pretty much written like a job offer to Melissa McCarthy.

Long ago, government man Steve Trevor crashed onto Wonder Woman’s island and brought her back to New York, but now they’ve split up. She still loves him, though, and it’s obvious that their relationship is going to be a focus.

Diana might not have an invisible jet (if she did, I didn’t see it) but she has a whole rainbow’s worth of over coloured aircraft.

She has the lasso, and those bracelets with which she deflects bullets.

Her nemesis is Veronica Cale, who in this continuity is an evil scientist and rival businesswoman with a secret, nefarious plan that you’ll probably guess ahead of time.

Then things get confusing because uh, she has three identities?

Her Diana Prince alter ego (the Clark Kent disguise that’s achieved by putting her hair up, wearing glasses and cutting back on the make-up) Wonder Woman also has a third guise and a day job as Diana Themyscyra, the head of Themiscyra industries. While little Ms. Prince is a disguise, it is well known in this world that Ms. T and Wonder W are the same — think Tony Stark and Iron Man from the end of their first film on.

And then further in, things fall off the rails:

Identifies with ET the Extra Terrestrial when his movie comes on TV.

Wants to belong and be “among” people, not just “with” them.

Sings along to the radio in multiple scenes — but nothing with a hairbrush in front of the mirror just yet.

Doesn’t like being “marketed, commercialized, merchandised”, though she is — there’s a joke about Wonder Woman tie-in dolls having their costumes redesigned that seems to reference the recent makeover for the comics.

Puts on her PJs for an ice-cream filled sleepover with best friend Myndi.

There it is, the pilot distilled into some sharp details by Connelly. Oh, and she also uses the phrase “You go, girl.” Bail out. Bail out!