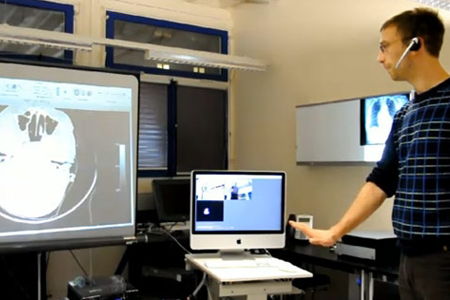 Welcome to the fucking future. When the Kinect came out, I blathered on and on about how its most amazing features would be found outside of traditional use. Once the drivers for the Kinect were out in the open, talented people began finding genius ways to implement the device. Beyond, you know, air kicking a virtual soccer ball. However, call me short-sighted cause I didn’t forsee this: the Kinect could be used to aid in the performing of surgery.

Surgical robots are super-precise, but Mike Fahey at Kotaku points out that the “problem with surgical robots is that while they allow for extreme precision, there is no tactile sensation for the doctor operating the tiny robotic arms. If a scalpel brushes against an exposed vein, for instance, the robot operator does not feel the subtle bump.”

That’s not the best thing in the world. Knick an artery, have no clue, and Steve McHaplessvictim slowly bleeds out.

What’s the answer to this? Force feedback. This is where the Kinect comes in:

Electrical engineering graduate student Fredrik Ryden solved this problem by writing code that allowed the Kinect to map and react to environments in three dimensions, and send spatial information about that environment back to the  user.
This places electronic restrictions on where the tool can be moved; if the actual instrument hits a bone, the joystick that controls it stops moving. If the instrument moves along a bone, the joystick follows the same path. It is even possible to define off-limits areas to protect vital  organs.

“We could define basically a force field around, say, a liver,” said Chizeck. “If the surgeon got too close, he would run into that force field and it would protect the object he didn’t want to  cut.”

Outstanding. Prior to the Kinect, such a system would have cost around $50,000. That’s a lot of Junior Bacon Cheeseburgers. Big-ups to Fredrik Ryden and all the faculty and students over at the University of Washington who came together to pull this off. There are few things I dig more than inventive subversions of existing technologies to give birth to something awesome.  And I can’t think of something more dope than using it to help save lives.