Archives
« Steve Wiebe Will Teach You How To Defeat Evil Via Donkey Kong.
CAGE MATCH: The Week in Nic Cage » 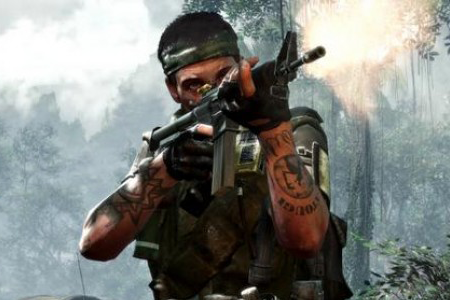 This is Press Start! The gaming column where I drop five happenings from around the scene in the past week. But! It’s New Year’s Eve. Last day of the year. The Earth, soaring in its majesty is back at the solar starting line. The masses, us in the civilized world, we have intent. To drink, and celebrate, and generally not give a fuck. The goddamn world shuts down between Christmas and New Year’s Day. Everything is reduced to a trickle. The gaming world isn’t any different. It bares the same marks.

Everything’s stopped. It’s boring. Cobbling this list of five things together took effort. But more than that, it took feigning interest. Here’s hoping when we all sober up next week shit gets poppin’ again. Until here’s the last, which didn’t start this way, but in hindsight turned oddly retrospective.

#1: Black Ops Is Most Pirated Game of 2010.
Black Ops has made more money than is fathomable. It’s crushed the billion dollar mark in record time. So when the BitTorrent site TorrentFreak announced this week that Black Ops was the most pirated game of 2010, I didn’t exactly cry for Activision. I bought a copy, what the fuck else do you want!

Specifics? The PC version of the game has been pirated 4.2 million dollars. Even if you round down, and assume that every copy costs $50, and that only 4 million copies were pirated, that’s 200 million dollars. Good lord! On top of that, the console version is reported at being pirated 930,000. That’s a lot of fucking money being non-spent.

Still though, it’s to be expected. As I said, Call of Duty is fucking huge. Its community is voluminous. They produce geek work, and they’ve logged 600 million hours in 45 days.

#2: Play WoW With Kinect. Cool?
It seems fitting to have a Kinect shout out in the final column of the year. (And like I said gaming news has been slow.) The latest hack? Why by golly, now you can play World of Warcraft! Using only the powers of your uh, body. You know, that gelatinous thing that wheezes when it walks up the stairs? I typecast. But it isn’t without precedent to back it up. Kinect hacks can be cool – flying robots, molestation simulators, and shit. However, then there’s stuff like this.

Use Kinect to move your Tauren Druid through the Barrens! Totally elite, man.

Kinect though. It isn’t going away. Not even close. It’s selling like fucking gangbusters, and I’d be lying if I said it didn’t depress me a much. Since we’re getting retrospective, let me say that the combined effort of motion controls and 3D media is enough to get me building my log cabin. So fucking help me if someday you need to be wearing goggles to play your PS4, which is only controlled through bodily motions. 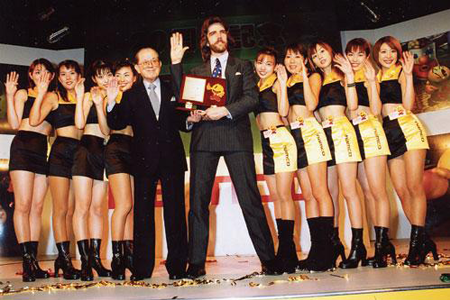 #3: Billy Mitchell and Steve Wiebe Continue To Rule.
Forget Jordan and Bird. Fuck Crosby and Ovechkin. The greatest rivalry in the world is between Billy Mitchell and Steve Wiebe. The close of 2010 brings a final week of news pertaining to Wiebe and Mitchell. Over in Chicago, Stevey is planning on running a clinic on how to regulate at Donkey Kong. For only 12 bucks, you can learn from a legend. However, not to be outdone, Billy Mitchell was interviewed by Moviefone. They wanted him to reflect on his behavior in King of Kong. Frankly? Don’t listen to it! Let me have my ultra villain. My Vader. My Sauron.

Every medium needs a villain.

Kudos to the two dudes for entertaining us throughout the year. Just when you think their eternal struggle is over, one of them bodyslams the other. We won’t see the end of this shit until someone hits the max record. Which according to Wiebe, is still another 100,000 points away. 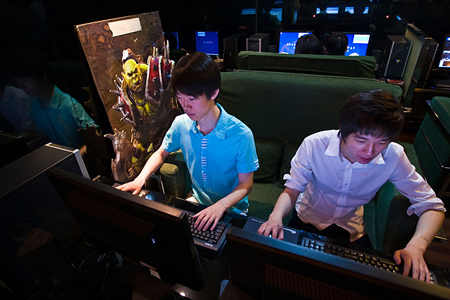 #4: Poor Korean Dude Dies From Gaming Binge.
Every news story that the Western world covered pertaining to Korean gaming this year was depressing as fuck. First there were the news stories that the Starcraft tournaments in the country were run by the fucking mob. Good lord. Later in the year it was announced that Starcraft addiction was so bad that there were tests going on for a miracle pill cure. And now news has come out that a 19 year-old Korean gamer known only as “Moon” died this week after a 12 hour FPS binge. According to the NY Daily News, the “19-year-old victim arrived at a gaming center, known locally as a “PC Bang,” in the city of Ulsan at approximately 2 a.m. on the morning of Dec. 27, and sat in front of a computer screen for eight hours straight.” After taking a break for food he continued before collapsing, and being taken to the hospital where he was pronounced dead.

It isn’t the first time someone’s died from a gaming binge, but it never fails to bum me out a bit. 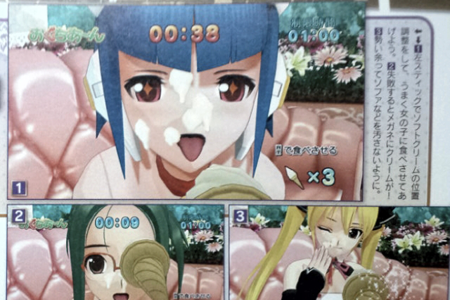 #5: Splash That Girl’s Face With Ice Cream. Make Her Dribble?
I’ve spent a good amount of time covering the Japanese dating simulation called Dream Club Zero this year. It’s a dating game that even makes a fucking pervert like me feel just a wee bit uncomfortable. Call me crazy, but I like my girls of age (listen man, the age of consent is pretty lenient some places!), and willing. Molestation? Not so much. From the game that lets you “feed girls sausages” and “help them out by slapping bugs off their tits” comes the latest reveal.

That’s supposed to be splooge!

I didn’t suspect many people will be perfecting the feeding of the girls. Especially with dong-lubricated controllers.

Yo, have a good fucking NYE everyone. Be safe. Drink and kiss and be merry but stay off the roads and out of the train tracks. I’ll see you next year.