Jupiter’s moon Europa has water vapor! Only on one side, but let’s not get picky! 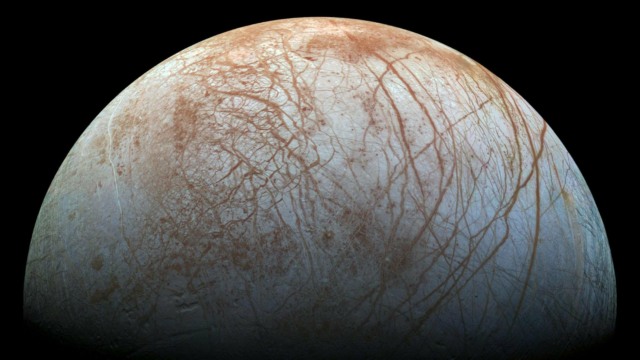 Listen, why any motherfuckers focusing on the “only on one side” portion of this story? Silly! Dumb! Instead, let’s be stoked that fucking water vapor has been found on Europa.

Hubble had previously detected water vapor on Europa — in apparent plumes that arise sporadically and temporarily extend perhaps 120 miles (200 kilometers) into space from the moon’s icy shell, which overlies a huge, buried ocean of liquid water. But this new finding is something quite different.

Lorenz Roth, a researcher at the KTH Royal Institute of Technology in Stockholm, Sweden, analyzed archival ultraviolet observations of Europa that the Hubble Space Telescope made with its Space Telescope Imaging Spectrograph instrument in 1999, 2012, 2014 and 2015.

This analysis revealed the existence of significant amounts of water vapor on Europa’s trailing hemisphere — the one that faces away from the moon’s orbital path around Jupiter. This water vapor persisted over the long haul, unlike the transient plumes, Roth reported in a study that was published last month in the journal Geophysical Research Letters.

“The observation of water vapor on Ganymede, and on the trailing side of Europa, advances our understanding of the atmospheres of icy moons,” Roth said in a statement. “However, the detection of a stable water abundance on Europa is a bit more surprising than on Ganymede because Europa’s surface temperatures are lower than Ganymede’s.”

Europa reflects sunlight more effectively than Ganymede and thus is about 60 degrees Fahrenheit (33 degrees Celsius) cooler than the larger moon, NASA officials said. High temperatures on Europa top out around minus 260 F (minus 160 C), yet a fair amount of ice appears to be sublimating there, transforming into vapor and wafting into space.

Adding to the intrigue is the fact that this water vapor is confined to Europa’s trailing hemisphere. It’s unclear why this is the case, NASA officials said.

We could get more clarity on these strange findings soon. In October 2024, NASA plans to launch a probe called Europa Clipper, which will arrive in the Jupiter system in April 2030. The spacecraft will perform dozens of close flybys of Europa, studying its ocean and ice shell and perhaps even zooming through a plume, if one happens to be flaring up at the right time.

Clipper will also scout out good landing sites for a life-hunting lander mission, which Congress has ordered NASA to develop (though this latter mission is not officially on NASA’s books yet).