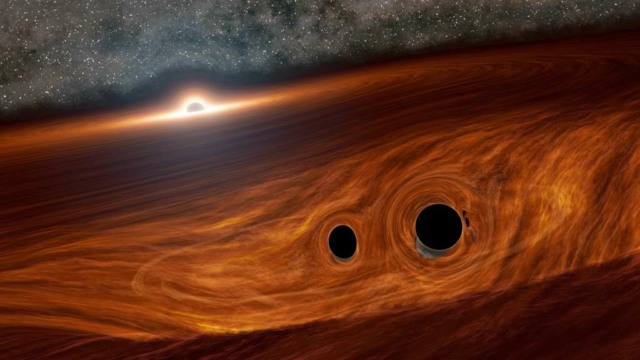 Even after his death, Berty Einstein’s presence is felt. Astronomers have detected light coming from behind a black hole for a first time, confirming another of dude’s predictions. Rock and roll, Albert! Rock and roll.

Back Entrance
A team of scientists detected a series of bright flares of X-ray light coming from one of the least expected places: behind a supermassive black hole.

“Any light that goes into that black hole doesn’t come out, so we shouldn’t be able to see anything that’s behind the black hole,” said Stanford University astrophysicist Dan Wilkins, lead author of a paper about the research published today in Nature Communications, in a statement.

An unusual characteristic of black holes made the discovery possible.

“The reason we can see that is because that black hole is warping space, bending light and twisting magnetic fields around itself,” Wilkins said.

Einstein’s theory of general relativity has always predicted this, but the bending of light around a black hole has never been confirmed — until now, a testament to the recent advancements in technology that allowed this unprecedented look at our cosmos.

It was an exciting moment in the history of astronomy.

“Fifty years ago, when astrophysicists starting speculating about how the magnetic field might behave close to a black hole, they had no idea that one day we might have the techniques to observe this directly and see Einstein’s general theory of relativity in action,” said Roger Blandford, co-author and professor of physics at Stanford, in the statement.

The team was studying coronas, the swirling halos of superheated gas that surround certain black holes. Once these gases get caught up in the magnetic field of the black hole, they produce X-rays, which we can observe from Earth.

We still don’t fully understand the coronas swirling around many black holes in our universe, but the European Space Agency’s upcoming Wide Field Imager detector could get us much higher resolution observations in the future.