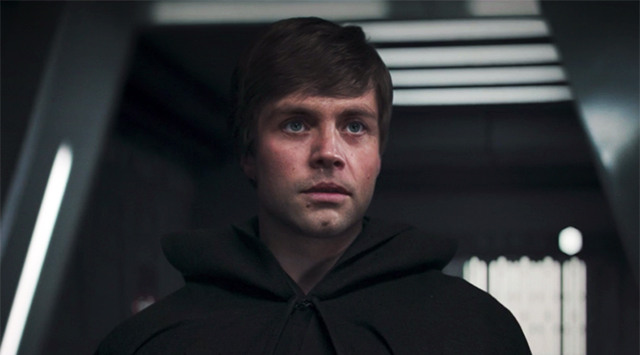 Motherfucking Lucasfilm film has picked up the YouTuber who used deepfakes to improve how Young Ass Luke looked in the season 2 finale of The Mandalorian. If you’re fucking loaded like Lucasfilm, it makes all the sense in the world to buy talented fuckers. Especially talented fuckers who are invested in your properties.

If you haven’t completed Season 2 of The Mandalorian, do not read any further as there are spoilers ahead.

Season 2 ends with a hooded Jedi boarding a ship and easily wiping out a bunch of Dark Troopers while keeping his identity unknown. When the hood is finally removed, it’s revealed that the mysterious person is a young Luke Skywalker who has arrived to retrieve Baby Yoda a.k.a. the Child a.k.a. Grogu to continue its Jedi training. While the face clearly appeared to belong to Luke circa 1983’s Return of the Jedi, it could’ve been better.

This is where a YouTuber who goes by Shamook steps in.

In December, Shamook posted his de-aged Mark Hamill deepfake on YouTube, alongside footage from the actual episode, and the improvements are quite noticeable. Check it out below.

Lucasfilm’s Industrial Light and Magic must have been equally impressed with Shamook’s work, because he revealed in the comments on a recent video that he’s been hired by the company as their Senior Facial Capture Artist, according to Screen Rant.

“As some of you may already know, I joined ILM/Lucasfilm a few months ago and haven’t had the time to work on any new YouTube content,” Shamook wrote. “Now I’ve settled into my job, uploads should start increasing again. They’ll still be slow, but hopefully not months apart. Enjoy!”

“[Industrial Light and Magic is] always on the lookout for talented artists and have in fact hired the artist that goes by the online persona ‘Shamook,’” a Lucasfilm representative said in a statement, per IndieWire. “Over the past several years ILM has been investing in both machine learning and A.I. as a means to produce compelling visual effects work and it’s been terrific to see momentum building in this space as the technology advances.”

Recent examples of Star Wars de-aging and/or CGI recreation of characters include Peter Cushing’s Grand Moff Tarkin and Carrie Fisher’s Leia Organa in 2016’s Rogue One, as well as a bit of Luke and Leia in 2019’s Rise of Skywalker.