Archives
« ‘The Witcher’ Season 2 is dropping December 17. Looks like I know how long I fucking got!
Monday Morning Commute: It’s Okay To Be Excited »

Valve’s Steam Deck handheld PC is dropping in December. Everyone wants in on that Switch hotness! 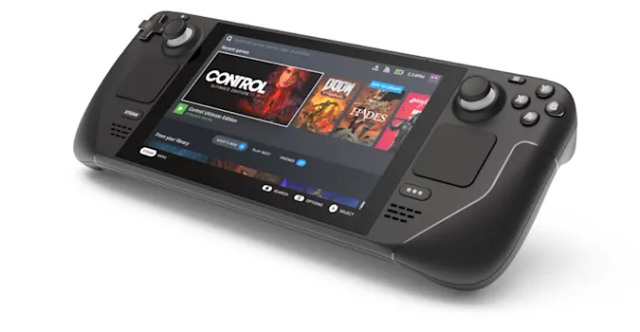 Valve wants in on that fucking Switch hotness. Just dripping in their loins to get in on movingthem units. You can’t blame the pig fuckers either, given Nintendo’s continued success. So this December they’re dropping the Steam Deck, which answers the question “What if there was a Steam Switch?” rather well. I ain’t fucking buying it, but goddamn can I see the appeal.

The rumors about Valve making a version of the Nintendo Switch for handheld Steam gaming are true. The company has revealed the Steam Deck, which will arrive in December in the US, Canada, the European Union and the UK, with availability expanding to more regions later. The system starts at $399.

Although the hardware isn’t final, according to IGN, the console currently looks like a mashup of a Switch, a Sega Game Gear and the Steam Controller. It has a seven-inch touchscreen, with a resolution of 1280 x 800 at a 16:10 aspect ratio, 400 nits of brightness and a 60 Hz refresh rate.

Valve teamed up with AMD on the hardware. The Steam Deck’s custom chipset features a 2.4-3.5GHz processor and a 1.0-1.6GHz GPU. Valve claims it’s a “Zen 2 + RDNA 2 powerhouse” that’s capable of running the latest major games “in a very efficient power envelope.”

The handheld PC comes with 16GB of LPDDR5 RAM and up to 512GB of NVMe internal storage, which you can expand with a microSD card. Valve says the Steam Deck will run for between two and eight hours on a single charge. The battery life will depend on how resource intensive the games you play are. The Switch, meanwhile, runs for up to nine hours.Steam Deck runs on a new version of SteamOS that’s designed for handheld use. Valve says it uses Proton, a compatibility layer that lets games run without developers having do any porting work. You’ll have access to your full library of games. You can expect to have access to many Steam features, including chat, remote play (so you can play games from your PC just about anywhere), cloud saves and, of course, the Steam storefront.

The device has a built-in quick suspend and resume feature. Pressing the power button will suspend your game and send the Steam Deck into sleep mode. You’ll be able to continue where you left off when you hit the power button again.

Steam Deck will support a variety of Bluetooth and USB-C peripherals. You can plug in a powered USB-C hub and use multiple devices at once. You can connect the system to an external display and play games at up to 8K at 60Hz or 4K at 120Hz.

Valve is also making an official dock with DisplayPort 1.4, HDMI 2.0 and Ethernet ports, as well as one USB 3.1 and two USB 2.0 ports. You’ll be able to use the Steam Deck as an actual PC, if you like — you’ll even be able to install some other game stores.

The Steam Deck could be a gamechanger for those who’ve been yearning to play all kinds of PC titles while they’re on the move or even relaxing on a couch. However, the name is very similar to Elgato’s Stream Deck, so it remains to be seen whether that part of the system will stick. Notably, the device costs just $50 more than the upcoming OLED version of the Nintendo Switch and the same as a digital PlayStation 5.

The base $399 Steam Deck comes with 64GB of eMMC internal storage and a carrying case. For $529, you can upgrade the storage to a 256GB NVMe SSD. The 512GB model costs $649 and comes with “premium anti-glare etched glass.” The dock will be sold separately.

Reservations for the Steam Deck open on July 16th at 1PM ET on the Steam store. You’ll need to pay a deposit, but that goes toward the price of the system.