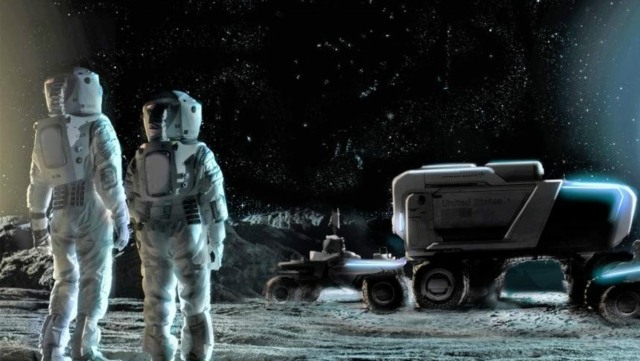 It’s nice to see Lockheed Martin taking another moment to develop something that isn’t designed to obliterate humans. Indeed, the company is teaming up with GM to build a rad ass Moon buggy! It is electric, autonomous, and ready to fucking zip.

Two titans of industry are teaming up to build an astronaut car for the moon.

Lockheed Martin and GM announced today (May 26) that they’re developing a crewed lunar rover for potential use by NASA’s Artemis program, which aims to establish a sustainable human presence on and around the moon by the end of the decade.

“These next-generation rover concepts will dramatically extend the exploration range of astronauts as they perform high-priority science investigation on the moon that will ultimately impact humanity’s understanding of our place in the solar system,” Rick Ambrose, executive vice president of Lockheed Martin Space, said in a statement.

The newly disclosed rover project isn’t coming out of left field. Last year, NASA asked the space industry for ideas about how to develop an unpressurized “Lunar Terrain Vehicle” (LTV) that could aid exploration of the moon’s south polar region. That’s where the crewed Artemis missions will touch down, perhaps as early as the mid-2020s, and where NASA envisions establishing a research outpost.

Lockheed and GM don’t have a NASA contract to build the LTV; the agency hasn’t awarded any such deals yet. But the companies are positioning themselves to be in the driver’s seat when such decisions are made — and when other customers may come along as well.

“This partnership is really about getting ahead of NASA’s future procurements that they may have, and really looking at the commercial environment that’s going to be on the lunar surface and building this partnership in advance of that, so that we can lead the way in mobility on the moon,” Lisa Callahan, vice president and general manager of commercial civil space at Lockheed Martin, said today during a webcast that unveiled the rover project.

The two companies have been working together on the LTV “for a good portion of a year now,” she added. The rover is still in the early design phase, so many details and specifications need to be worked out. But Lockheed Martin and GM representatives said that it will be an all-electric vehicle capable of significant autonomy, and that the first version of it will likely accommodate two astronauts.

\The collaboration between the two companies makes a lot of sense. Lockheed has built many spacecraft for NASA over the years, including the Orion crew capsule, a key piece of the Artemis infrastructure. (Other important Artemis elements are the giant Space Launch System rocket, a moon-orbiting space station called Gateway and a crewed lunar lander.) And GM helped develop the electric “moon buggy” — officially known as the Lunar Roving Vehicle — that NASA astronauts drove around the moon during the Apollo 15, Apollo 16 and Apollo 17 missions.

The LTV won’t be the only rover at Artemis astronauts’ disposal, if all goes according to plan. NASA also intends to provide its lunar explorers with a larger, pressurized (enclosed) rover that they can live in for extended periods as they traverse the south polar landscape.

NASA officials have said that they aim to develop the pressurized rover in partnership with the Japan Aerospace Exploration Agency (JAXA), a key Artemis partner. And JAXA is building just such a lunar RV, with the help of Toyota.