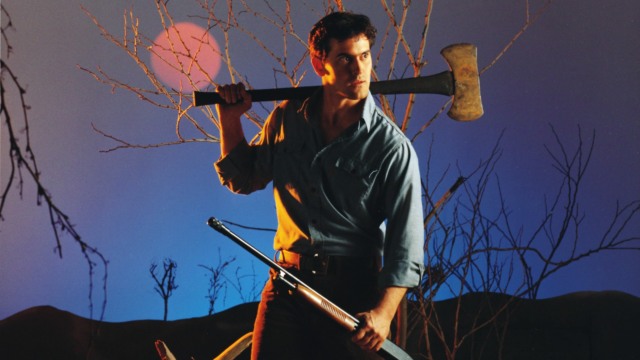 There’s an Evil Dead sequel coming and the motherfucker is coming to HBO Max. Titled Evil Dead Rise, the movie is going to continue within the storylines established in the original trilogy, as opposed to the reboot. Hey! I don’t know if this shit is going to be good, but I’m definitely intrigued. Especially since the project has Sam Raimi and Bruce Campbell onboard as executive producers.

Forty years after the release of “Evil Dead,” the supernatural horror trilogy created by Sam Raimi is rising from the ashes. A new installment, titled “Evil Dead Rise,” is in the works at New Line Cinema.

Unlike its predecessors, “Evil Dead Rise” is set for release on streamers: HBO Max in the U.S., on Canal Plus in the U.K. and Metropolitan in France.

Rami created the series and directed the original film, 1981’s “The Evil Dead,” and its two sequels, 1987’s “Evil Dead II” and 1993’s “Army of Darkness” at New Line. He won’t be returning behind the camera to direct, but he will serve as an executive producer with Bruce Campbell, who starred as series protagonist Ash Williams. (Campbell won’t appear onscreen in the upcoming entry.) “Evil Dead” veteran Robert Tapert is also returning to produce the next chapter in the seminal horror series.

The franchise was revived at Sony in 2013 with “Evil Dead,” a soft reboot directed by Fede Alvarez. Raimi, Campbell and Tapert produced that film, which was the first to not star Campbell as Ash. A TV series called “Ash vs Evil Dead” launched on Starz in 2015 and ended in 2018, with Campbell reprising his signature role, and Raimi, Tapert and Campbell on board as producers.

The next chapter in the saga builds off the original trilogy, rather than the 2013 reboot, and moves the action out of the woods and into the city. The twisted tale centers on two estranged sisters, portrayed by Alyssa Sutherland and Lily Sullivan, whose reunion is cut short by the rise of flesh-possessing demons, thrusting them into a primal battle for survival as they face the most nightmarish version of family imaginable.

Filmmaker Lee Cronin (“The Hole in the Ground”) was hand-picked by Raimi and Campbell to write and direct “Evil Dead Rise.”

“I’m thrilled to bring ‘Evil Dead’ back to its original home at New Line 40 years after the release of the first film,” Raimi said in a statement. “The company’s history as pioneers of horror speaks for itself. I’m equally excited to be working with Lee Cronin, whose gifts as a storyteller make him the ideal filmmaker to continue the enduring legacy of the franchise.”

Campbell added, “At its core, ‘Evil Dead’ is about ordinary people overcoming extraordinarily terrifying situations. I can’t wait for Alyssa and Lily to fill the blood-soaked shoes of those who have come before them and carry on that tradition.”

“Evil Dead Rise” will begin production in New Zealand next month. It’s unclear when the film will arrive on the small screen.

“The ‘Evil Dead’ movies filled my brain with terror and awe when I first saw them at 9 years old,” Cronin said. “I am excited and humbled to be resurrecting the most iconic of evil forces for both the fans and a whole new generation.”

Following the success of “Evil Dead,” New Line Cinema went on to produce horror hits such as “It” and its sequel “It: Chapter Two”, as well as James Wan’s “The Conjuring” series.

“New Line has a proud history of involvement in some of the most influential and enduring horror films of all time, and the original The Evil Dead was a landmark moment for the studio,” said Richard Brener, New Line president and chief creative officer. “The movie transformed the genre and with each new installment, Sam, Rob and Bruce have continued to raise the bar. It’s exciting to have them back in the fold for ‘Evil Dead Rise’ after all these years, especially as they bring with them an immense talent in director Lee Cronin. His inventive spirit and his reverence for the franchise make him the perfect director to unleash Evil Dead once again.”