China’s Rover has sent back its first images of Mars. It’s a fucking party there now! 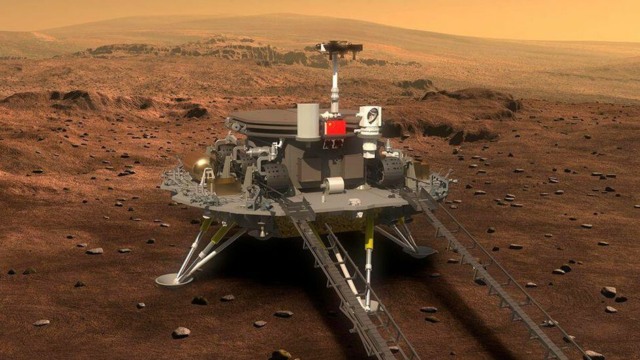 China’s got its own Rover on Mars and it’s sending back its own goddamn images of the planet. Between this and the obvious existence of UFOS it’s a fucking intergalactic party these days. 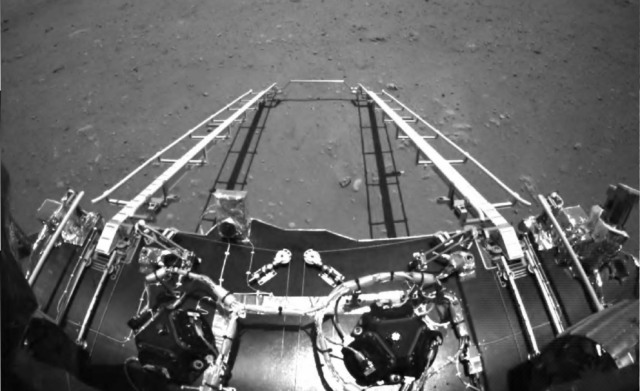 On Sunday, China became the second country to successfully land a mission on Mars. The Zhurong rover, now comfortably sitting just above the dusty plain of Utopia Planitia, has sent back its first images of the Martian landscape.

The images, shared in a new release from the China National Space Administration, are important because they will determine what the rover will set out to examine. Unlike NASA’s Perseverance, which is the fifth rover the agency has deployed on the Red Planet and has a clearly outlined mission to search for fossilized microbial life, Zhurong has a looser schedule.

One image is black and white and was taken by the obstacle avoidance camera on the rover’s front. A ramp from the lander has extended to the Martian surface, and the rover’s wheels are just visible at the bottom of the frame. It is, in sum, a very “welcome to Mars” image. The second image is in color—the rocky red soil is a familiar sight for us lately—was taken by the navigation camera on the back of the rover. The solar panels on Zhurong appear to have unfurled without a hitch. The probe also sent video footage from China’s orbiter, which shows the lander and rover’s separation from the orbiter during landing. 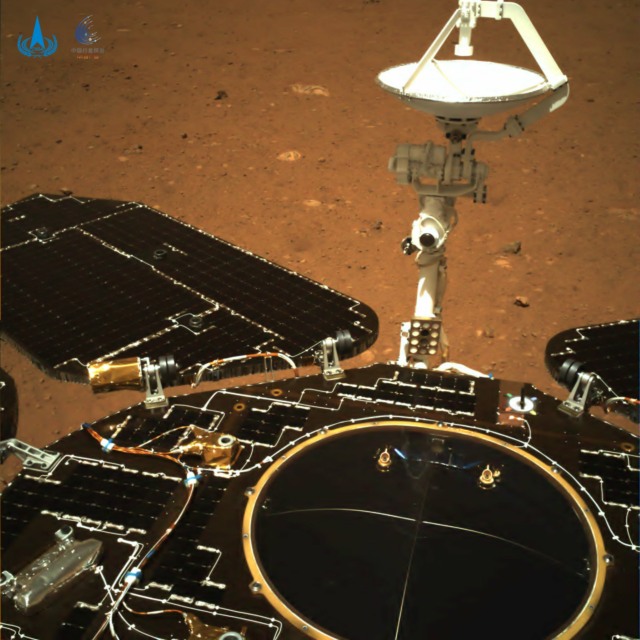 In a statement on Wednesday, NASA Administrator Bill Nelson said: “Congratulations to the China National Space Administration on receiving the first images from the Zhurong Mars rover! As the international scientific community of robotic explorers on Mars grows, the United States and the world look forward to the discoveries Zhurong will make to advance humanity’s knowledge of the Red Planet. I look forward to future international discoveries, which will help inform and develop the capabilities needed to land human boots on Mars.”

The Chinese rover is over 1,000 miles from NASA’s Perseverance, and given the highly localized nature of rover missions, they won’t ever meet. While Perseverance will scour a dried-up river delta in Jezero Crater, Zhurong’s environment in Utopia Planitia is mostly plain. There are a couple features there of particular interest to researchers. Some of those include sand dune-like structures, evidence of Martian frosts, and a conical feature seen in satellite images from Mars orbiters, which could be an ancient lava or mud volcano, Nature reported. If a mud volcano, it could help explain why so much methane is in the Martian atmosphere.

Zhurong’s mission is set to run for just over 90 days, so there’s a lot to pack into that time. With the Perseverance and Curiosity rovers and the InSight lander also operating on Mars, we can look forward to a wealth of news from the Red Planet in the coming months.