Archives
« ‘Overwatch’ Game Director Jeff Kaplan Is Leaving Blizzard. Man, Their Talent Drain Is Fucking Insane
PlayStation Plus Is Getting Video Pass Service According to Leak. You Fucked Up, Fellas! » 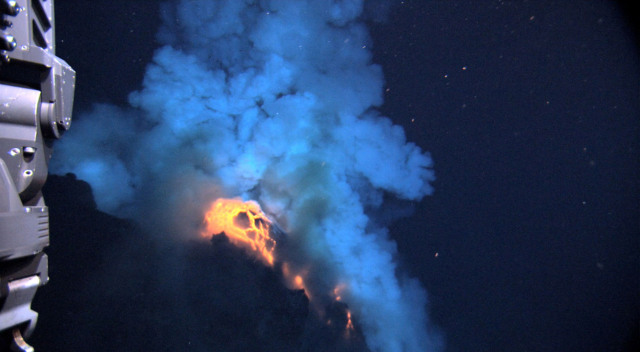 Volcanic eruptions, complete with glowing lava rivers and towering plumes of ash, are among the most visually spectacular phenomena on Earth. But while these eruptions have made history, captured imaginations, and reshaped landscapes, the vast majority of volcanic activity on Earth occurs deep beneath the oceans.

As it turns out, these submarine volcanoes may be even more impressive than their familiar terrestrial counterparts, because the enormous energy they generate could power entire continents, according to a study published on Monday in Nature Communications. As a bonus, these eruptions could also provide insights into one of the most tantalizing unresolved questions in science: how did life first emerge on our planet?

Volcanoes on land are known for belching ash plumes into the air that can interrupt plane traffic and affect weather patterns on regional scales. Seafloor volcanoes also scatter ash into the surrounding ocean, but these events create a different kind of disruption: gigantic cyclones of superhot water, known as megaplumes, that are so voluminous they could fill up 40 million Olympic-sized swimming pools.

For years, scientists have been fascinated with the origins and dynamics of these megaplumes, as well as their impacts on ocean environments and life. But because seafloor eruptions occur in some of the most remote and extreme regions of our planet, it is challenging to detect and study them.

Sam Pegler and David Ferguson, volcanologists at the University of Leeds who co-authored the new study, used both real observations and mathematical simulations to get around this dearth of data.

The team relied on information collected by another group of researchers who studied the Northern Escanaba (NESCA) lava flow in the Northeast Pacific and published their results in a 2009 study in Journal of Volcanology and Geothermal Research in 2009.

That study found that the NESCA vent heats up seawater into plumes that can carry volcanic rock fragments and particles known as “tephra” as far as three miles from the eruption. Peglar and Ferguson now use a “novel approach” to show that the movement of tephra within these plumes “can be used to constrain the energy discharge rates associated with volcanic eruptions,” according to their new research.

In other words, the pair devised a model that can generate an estimate of the energy release of these seafloor explosions. The results were stunning: this one NESCA eruption created a megaplume with enough power to meet the energy needs of the entire United States.

“Our results constrain the rate of energy release (or power) and show that during the eruption the power output is sufficient to run the US for that period of time, probably on the order of hours/days (however long it lasts—we don’t know precisely),” said Ferguson in an email.

This comparison is, unfortunately, figurative, as there’s no way to actually plug a power-hungry nation into this underwater energy source. While there has been some preliminary research into capturing offshore geothermal energy from the ocean crust, these megaplume events are too transient and out-of-reach to offer similar potential.

“I would say there is effectively zero chance of capturing the energy for all sorts of reasons, such as we don’t know when or where the eruptions will happen, very tricky to access, etc,” Ferguson said. “The point of the comparison was really just to illustrate how powerful/energetic these things are.”

Still, it’s mind-boggling to imagine that such forceful yet mysterious events are occurring in the ocean depths, influencing the temperatures and chemical compositions of seascapes around them. Given that the oceans are full of organisms, even in the weird habitats of the deep seafloor, these megaplumes may also be shaping life in the oceans in ways that are barely understood at this time.

“Extremophile life in the deep ocean is sustained (in the complete absence of sunlight and other nutrients) by the energy and chemicals supplied by magmatic and volcanic activity,” Ferguson said. “In addition to finding unexpected forms of life around seafloor hydrothermal vents (black smokers), scientists have also discovered diverse microbiomes within the solid oceanic crust itself.”

“The most likely mechanism that these thermophilic (heat-loving) microbes are dispersed to other sites is in megaplumes,” he continued. “Our results suggest that this process is likely to be mediated by volcanic activity. There is also the interesting conjecture that many biologists consider deep sea hydrothermal systems as good candidates for the origin of life on Earth.”

Pegler and Ferguson found that these energetic megaplumes could not be solely fueled by the eruption of molten lava from seafloor vents. They propose that hot fluid pockets inside Earth’s crust are also able to escape during eruptions, which contributes to the immense power of the plumes.

“Our result suggests that these eruptions involve huge transfer of heat to the ocean, and that much of it may be sourced from the rapid venting of heated subsurface fluids,” Ferguson said. Future studies may reveal the role of volcanic gases in this heat output, the relationship between the vent sites and the eruptions, and how the tephra are incorporated into the megaplumes, he added.

The team concluded that their method could “provide new inroads” for studying megaplumes, and the submarine volcanoes that generate them, according to the study. These mathematical techniques could help interpret new observations collected by expeditions and instruments sent to monitor the enigmatic behavior of seafloor volcanoes.

“Hopefully future in situ observations of deep sea eruptions will advance our understanding” of the many outstanding questions about these super-powered events, Ferguson said.