Archives
« Konami Has Filed New Japanese Trademarks For ‘Castlevania’ and ‘Metal Gear Rising’ Like They Still Make Games Or Something!
‘Spider-Man: Into The Spider-Verse’ Sequel Has Three Talented-Ass Directors. I’m Stoked! »

‘The Meg 2’ Director Ben Wheatley Wants to Make a ‘DOOM’ movie and Let Him You Fucking Cowards! 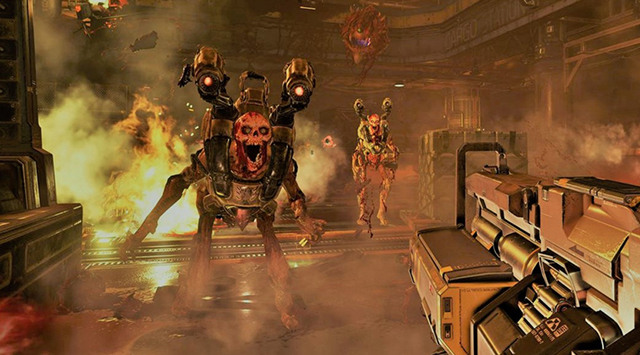 The Meg 2 director Ben Wheatley wants to make a DOOM movie and the wonder he could bring to the franchise makes my tits stiffen. Let this man direct that movie. As well, if you’re an ignorant knob and you only know Ben Wheatley from his connection with Meg 2, get learned and then come back here. You see, dude has directed a bunch of cult classics, especially Kill List.

The Meg 2 director Ben Wheatley has not yet given up on making a video game movie adaptation, according to a new podcast. Despite departing Tomb Raider 2 earlier this year, Wheatley is very much still interested in making a movie based on a video game — and according to him, if he had his way, it would be a new Doom movie or maybe even a Counter-Strike one. That doesn’t mean either will happen, of course, but it’s always interested to hear what directors would actually be interested in pursuing.

“Video games and films are so intertwined, aren’t they? It’s like because they feed backwards and forwards in terms of their referencing, it’s tricky,” Wheatley said on a recent episode of The Playlist podcast. “And the things that you think are original about the games are from films often, and so when you take away the interactive element of it, there’s not much left to it, you know? I still want to make a Doom film, though. I know it’s been done, but come on. Or Counter-Strike, that would be the one I’d like to make.”

Based on what Wheatley says in the podcast, moving on from Tomb Raider 2 was essentially because the pandemic delayed production and then the opportunity to direct The Meg 2 came along. It wasn’t a matter of not wanting to do the film, which will now be written and directed by Lovecraft Country showrunner Misha Green. The original 2018 film starred Alicia Vikander as Lara Croft and pulled much more from the modern video games — to mixed success.

The Meg 2, which appears to be tentatively titled Meg 2: The Trench, does not yet have a release date. It is expected that Jason Statham will return to star in the sequel. As for the Doom franchise, the most recent Doom video game, Doom Eternal, is available now on Xbox One, PlayStation 4, PlayStation 5, Nintendo Switch, Xbox Series X|S, PC, and Google Stadia. You can check out all of our previous coverage of the Doom franchise right here.

What do you make of Wheatley wanting to do a Doom or Counter-Strike movie? Is that the sort of thing you’d like to see the director tackle? Let us know in the comments, or feel free to reach out and hit me up directly over on Twitter at @rollinbishop to talk about all things gaming!