Archives
« ‘Shang-Chi and the Legend of the Ten Rings’ Trailer: Bad Ass Through and Through!
‘Furiousa’ Begins Filming in 2022 and the ‘Mad Max’ Prequel Will Take Place Across Many Years. Gimme, George! Gimme! » 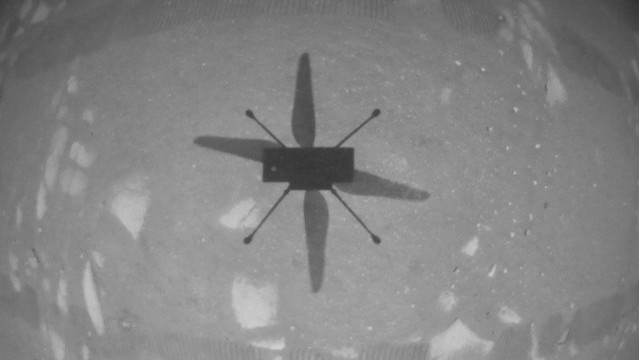 Good goddamn, motherfuckers! We have flown on Mars! Flown on Mars! NASA’s Ingenuity helicopter flew today, and I’ll be stoked because of it for the rest of the day.

NASA’s Ingenuity helicopter just took its first flight on Mars. It’s the first powered, controlled flight on another planet. Ingenuity completed the flight carrying a small piece of one of Orville and Wilbur Wright’s original aircrafts tucked under its blades, in a nod to the legacy that made this morning’s achievement possible.

Ingenuity’s momentous hover over the Red Planet was autonomous; the craft is not controlled by any joystick on Earth, but by the computers aboard the craft.

You wouldn’t believe what I just saw.

The helicopter, which journeyed to Mars strapped to the belly of the Perseverance rover, harbors no scientific instruments. It is an experimental craft designed by NASA, tasked with establishing a precedent for future flight on other planets, with differing atmospheres and gravitational pulls than our own. (On Mars, the atmosphere is 1% as thick as Earth’s, and the pull of gravity there is about one-third what it is on Earth.) Ingenuity just passed that test with flying colors and has at least four more flights on its docket before the $85 million machine is retired.