Scientists have confirmed powerful antimatter particle crashed into Antarctica. This is how ‘The Thing’ starts, right? 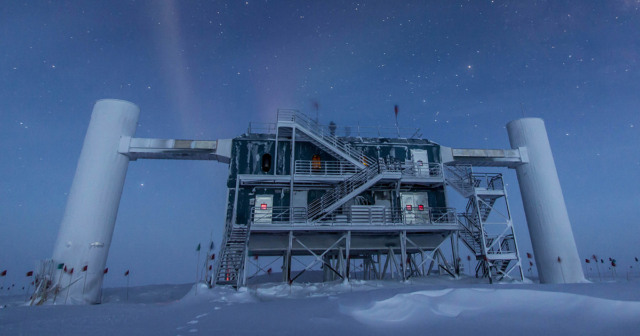 This is one of those awe-inspiring news stories that seems beyond my monkey brain. An antimatter particle slammed into Antarctica. Like, what the fuck? Don’t get me wrong, this is rad. It’s, uh, also how The Thing starts, or something. But rad none the less.

The most remote particle detector on Earth has detected the most energetic antimatter particle ever: a single ultralight particle that smacked into the Antarctic ice with the (relatively) thundering energy of 6,300 flying mosquitos.

The collision occurred in 2016, but researchers only confirmed the details of the event March 10 in a paper published in the journal Nature. This antineutrino, an antimatter counterpart of the wispy, difficult-to-detect particles known as neutrino, collided with an electron somewhere in the ice of Antarctica at nearly the speed of light. That collision created a shower of particles detected by the buried IceCube Neutrino Observatory — a facility responsible for much of the important high-energy neutrino research of the last decade, as Live Science has reported. Now, IceCube physicists report that that particle shower included evidence of a long-theorized but never-before-seen event known as “Glashow resonance.”

Back in 1960, the physicist Stephen Glashow, then a post-graduate researcher at the Nordic Institute for Theoretical Physics in Denmark, predicted that when a sufficiently high-energy antineutrino collided with an electron it would produce a heavy, short-lived particle known as a W boson. Glashow’s prediction relied on the fundamental rules of the Standard Model of particle physics, a theory that dominates how researchers understand everything from the insides of atoms to light to antimatter.

Detecting Glashow’s resonance is a powerful confirmation of the Standard Model. But it requires the neutrino to carry far more energy than any particle accelerator from 1960 — or 2021 — can produce: 6.3 petaelectronvolts (PeV).

It’s usually difficult to wrap one’s mind around the numbers involved in high-energy particles. A single neutrino has a mass of about 2 billion-billion-billion-billionths of a gram, and thousands of low-energy neutrinos from the sun pass through your body every second of the day without noticeable effects. A neutrino with 6.3 petaelectronvolts (PeV) of energy is another beast entirely. According to CERN, the European physics laboratory, a teraelectronvolt (TeV) is equivalent to the energy of a single mosquito flying at 1 mph (1.6 km/h). And 6.3 PeV is 6,300 TeV. So turn that single mosquito into a swarm of 6,300 (or accelerate it to Mach-8.2, more than four times the top speed of an F-16) and you’ve got the energy of the single infinitesimal particle required for Glashow’s resonance.

Another way to think of 6.3 PeV: It’s 450 times the maximum energy that the Large Hadron Collider — CERN’s 17-mile-long (27 kilometers), multibillion dollar accelerator responsible for the detection of the Higgs boson — should be able to produce by the late 2020s following ongoing upgrades.

Given the huge energy required, no one hoped to spot Glashow’s resonance using only human tools. But IceCube, which detects particles that fall out of the sky, gets an assist from the vast universe. The particle that smacked into the ice in 2016 produced a characteristic shower of particles that researchers now say came from a decaying W boson, which is a fundamental particle that along with the Z boson is thought to be responsible for the weak force. And that’s the telltale sign of a 6.3-PeV antineutrino and Glashow’s resonance.

The researchers still aren’t sure what cosmic accelerator produced the monstrous speck of antimatter, but said more events should help them refine their models of whatever natural space canons produce such extreme particles and fire them at Earth.