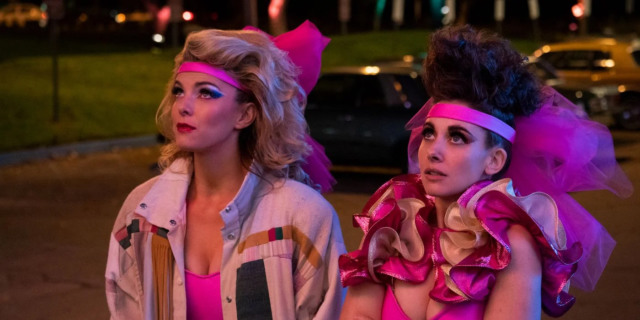 Them GLOW creators aren’t staying on the mat (heh) for too long! No, indeed they’re not! They’ve got a new series in the works at Apple TV+, and the former show’s star Alison Brie will be joining them.

Liz Flahive and Carly Mensch, the duo behind Netflix’s acclaimed “GLOW,” have found a new home for their next television series. Apple TV+ has greenlit an anthology series from Flahive and Mensch that will feature an all-star cast, including Nicole Kidman, Cynthia Erivo, Merritt Wever, and Alison Brie. The series, titled “Roar,” is based on Cecelia Ahern’s book of the same name, which featured a wide collection of stories about women overcoming all manner of obstacles. Per Variety, Apple has ordered eight half-hour episodes for the show. A specific release date for “Roar” is under wraps.

The show is the first project to come from Flahive and Mensch’s recently signed overall deal with Apple’s growing streaming service. Flahive and Mensch will serve as showrunners and executive producers. Additional executive producers include Kidman and Per Saari via Blossom Films and Bruna Papandrea, Steve Hutensky, and Allie Goss via Made Up Stories.

For “GLOW” fans, “Roar” will likely be a highly anticipated original. Netflix canceled “GLOW,” which was slated to return for a fourth and final season, in October 2020, in part due to coronavirus-related production difficulties. The show was a favorite among critics; IndieWire’s Ben Travers lauded Flahive and Mensch’s work on “GLOW” in October 2020 and noted that the duo’s careful handling of the show’s characters and the series’ pacing helped “GLOW” retain a faithful audience unlike many streaming-only titles.

“Plenty of shows adapt and grow, but Flahive and Mensch came out of the gate with an intimate understanding of their characters, their pace, their tone, their goals, and their overall voice,” Travers said in his write-up on the series’ cancellation. “The exact opposite has been a recurrent problem of series in the streaming age: Shows take too long to figure out the best version of themselves, and viewers get tired of waiting and quit. That ‘GLOW’ was able to turn out even better subsequent seasons after nailing its debut is a feat reserved for TV greats.”

As for “Roar,” the show will serve as a reunion between Alison Brie and her “GLOW” creators, Brie starred as Ruth Wilder in all three seasons.