Scientists have pulled off real-time communication with lucid dreamers. Reality is wild! 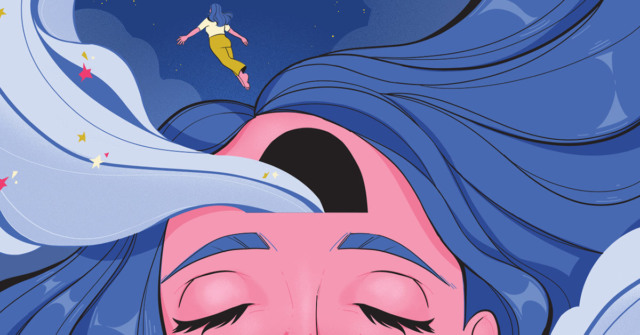 Holy fuck, dudes. Scientists have communicated in real-time with lucid dreamers. Let that statement rattle around your brain. Then, wrap said brain in tinfoil while you sleep. ‘Cause them fuckers are coming for your dreams.

Humanity has been able reach distant vistas, such as the Moon, the deep oceans, and the wild expanses at Earth’s poles. Now, scientists have made a new breakthrough in the exploration of a very different type of frontier—the hallucinatory world inside dreams.

An international team of researchers was able to achieve real-time dialogues with people in the midst of lucid dreams, a phenomenon that is called “interactive dreaming,” according to a study published on Thursday in Current Biology.

Participants in the study were able to correctly respond to questions, such as simple math problems, while they were deep in the throes of rapid-eye movement (REM) sleep. The research reveals a “relatively unexplored communication channel” that could enable “a new strategy for the empirical exploration of dreams,” the study reports.

“There are studies of lucid dreamers communicating out of dreams, and also remembering to do tasks,” said Karen Konkoly, a PhD student at Northwestern University and first author of the paper, in a call. “But there’s a fairly limited amount of research on the stimuli going into lucid dreams.”

“One thing that surprised us is that you could just say a sentence to somebody, and they could understand it just as it actually is,” she added.

Konkoly and her colleagues recruited 36 people to fall asleep in laboratories located in the United States, France, Germany, and the Netherlands, with the aim of entering a lucid state in which the person was aware that they were in a dream. The study included several experienced lucid dreamers, including one individual with narcolepsy, as well as people who were less familiar with this type of dream.

The researchers verified that participants had entered REM sleep by placing electrodes next to their eyes, on their scalps, and on their chins. By measuring activity such as brainwaves and eyeball movements, sleep experts can determine if a person had entered this deep sleep state. Some of the participants were then asked to confirm that they were in a dream with a pre-arranged ocular response in which they moved their eyes in a specific left-right pattern.

These eye signals, along with facial contortions, were used as a means of communication during the sleep sessions. For instance, the researchers asked an 19-year-old American participant to subtract six from eight while he was in a lucid dream, and he correctly signaled the answer “two” with two eye movements from left to right. When asked again, he repeated the correct answer.

Roughly 18 percent of the trials resulted in this level of clear and accurate communication from the dreamer; 17 percent produced indecipherable answers, 3 percent ended with incorrect responses, and 60 percent did not provoke any response at all.

“It’s amazing to sit in the lab and ask a bunch of questions, and then somebody might actually answer one,” Konkoly said. “It’s such an immediately rewarding type of experiment to do. You don’t have to wait to analyze your data or anything like that. You can see it right there while they’re still sleeping.”

What’s more, many participants were able to recall the interactions with the researchers after they woke up, with individuals reporting that the prompts sounded like a voiceover narrator or a radio speaker that was clearly coming from outside of their dream.

We’ve all had the experience of waking up from a vivid dream, only to feel as if its fragmentary details are rapidly receding into our waking minds until we can no longer recount its events.

Along those lines, some individuals remembered different questions and answers after they woke up than the ones they received or gave in the dream, highlighting the difficulty of accurately reconstructing dreams once a person is awake.

The team plans to build on this study with more experiments that will probe the possibilities of two-way communication with lucid dreamers.

“We’ve thought of so many experiments we could do with this,” Konkoly said. “I think one predicate that we’re working on now is: how can we optimize the procedure? How can we have this happen more? How can we have people have more lucid dreams? How can we communicate more reliably?”

“We have a lot of different ideas,” she concluded, “and we’re excited to test them.”