Archives
« Chris Evans returning as Captain America in the MCU. That was quick, but I’ll take it
John Carpenter has signed deal with Serial Box to produce original audio horror stories under ‘John Carpenter Presents’ banner »

Most distant quasar discovered has the mass of 1.6 billion suns. Holy hell! 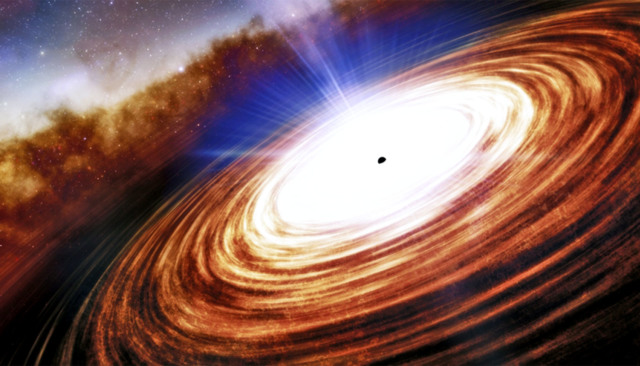 As I often say around these parts, space is fucking nuts. Like, how do we comprehend this shit? A quasar with the mass of 1.6 billion suns! It’s beyond the understanding of our monkey minds. But, that’s why I love it so much.

Astronomers have observed a luminous quasar 13.03 billion light-years from Earth—the most distant quasar discovered to date.

Dating back to 670 million years after the Big Bang, when the universe was only 5% its current age, the quasar hosts a supermassive black hole equivalent to the combined mass of 1.6 billion suns.

In addition to being the most distant—and by extension, earliest—quasar known, the object is the first of its kind to show evidence of an outflowing wind of super-heated gas escaping from the surroundings of the black hole at a fifth of the speed of light.

In addition to revealing a strong quasar-driven wind, the new observations also show intense star formation activity in the host galaxy where the quasar, formally designated J0313-1806, is located.

Researchers discovered the previous record-holder among quasars in the infant universe three years ago.

Quasars are thought to result from supermassive black holes gobbling up surrounding matter, such as gas or even entire stars, resulting in a maelstrom of superheated matter known as an accretion disk that swirls around the black hole. Because of the enormous energies involved, quasars are among the brightest sources in the cosmos, often outshining their host galaxies.

Although J0313-1806 is only 20 million light-years farther away than the previous record holder, the new quasar contains a supermassive black hole twice as heavy. This marks a significant advancement for cosmology, as it provides the strongest constraint yet on the formation of black holes in the early universe.

“This is the earliest evidence of how a supermassive black hole is affecting its host galaxy around it,” says lead author Feige Wang, a Hubble Fellow at the University of Arizona’s Steward Observatory. “From observations of less distant galaxies, we know that this has to happen, but we have never seen it happening so early in the universe.”

Quasars that already amassed millions, if not billions, of solar masses in their black holes at a time when the universe was very young pose a challenge to scientists trying to explain how they came into existence when they barely had the time to do so.

A commonly accepted explanation of black hole formation involves a star exploding up as a supernova at the end of its life and collapsing into a black hole. When such black holes merge over time, they can—theoretically—grow into supermassive black holes.

However, much like it would require many lifetimes to build a retirement fund by chipping in a dollar each year, quasars in the early universe are a little bit like toddler millionaires; they must have acquired their mass by other means.

The newly discovered quasar provides a new benchmark by ruling out two current models of how supermassive black holes form in such short timescales. In the first model, massive stars that consist largely of hydrogen and lack most other elements that make up later stars, including metals, form the first generation of stars in a young galaxy and provide the food for the nascent black hole. The second model involves dense star clusters, which collapse into a massive black hole right from the outset.

Quasar J0313-1806, however, boasts a black hole too massive to be explained by those scenarios, according to the researchers who discovered it. The team calculated that if the black hole at its center formed as early as 100 million years after the Big Bang and grew as fast as possible, it still would have had to have at least 10,000 solar masses to begin with.

“This tells you that no matter what you do, the seed of this black hole must have formed by a different mechanism,” says coauthor Xiaohui Fan, professor and associate head of the astronomy department. “In this case, one that involves vast quantities of primordial, cold hydrogen gas directly collapsing into a seed black hole.”

Because this mechanism doesn’t require full-fledged stars as raw material, it is the only one that would allow the supermassive black hole of quasar J0313-1806 to grow to 1.6 billion solar masses at such an early time in the universe. This is what makes the new record quasar so valuable, Fan says.

“Once you go to lower redshifts, all the models could explain the existence of those less distant and less massive quasars,” Fan says. Redshift refers to the phenomenon in which light from far-away objects appears redder than light from closer sources because of the ongoing expansion of the universe.

“In order for the black hole to have grown to the size we see with J0313-1806, it would have to have started out with a seed black hole of at least 10,000 solar masses, and that would only be possible in the direct collapse scenario,” Fan says.