Archives
« ‘Horizon Forbidden West’ is launching in late 2021. Bank on it being the big holiday title, baby!
David Fincher has signed a four-year exclusive deal with Netflix. Give me fucking ‘Mindhunter’ Season 3, I beg you! »

Pope Francis wants us to pray that AI and robots “always serve mankind” which is wild. Prayers versus Skynet, I got Skynet. 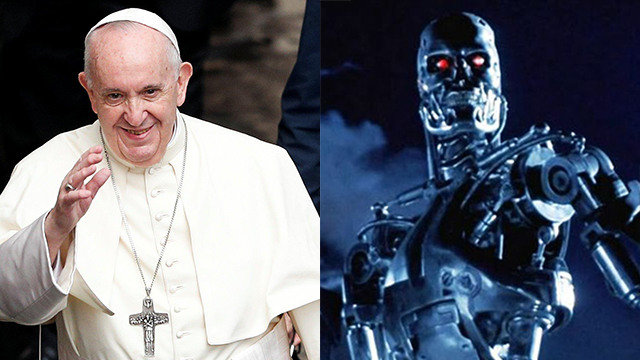 Pope Francis is getting into the “shitting one’s pants over AI” game, my dudes. Like, what a weird fucking world we live in. Right? The Pope is concerned about AI, and, well, wants to pray about it. I think we’d be better off using, you know, science to address the problem. But, that’s just me.

Pope Francis has asked believers around the world to pray that robots and artificial intelligence “always serve mankind.”

The message is one of the pope’s monthly prayer intentions — regular missives shared on YouTube that are intended to help Catholics “deepen their daily prayer” by focusing on particular topics or events. In August, the pope urged prayer for “the maritime world”; in April, the topic was “freedom for addiction.” Now, in November, it’s AI and robots.

Although the message sounds similar to warnings issued by tech notables like Elon Musk (the Tesla CEO famously compared work on artificial intelligence to “summoning the demon”), the pope’s focus is more prosaic. He doesn’t seem to be worrying about the sort of exotic doomsday scenario where a superintelligent AI turns the world into paperclips, but more about how the tech could exacerbate existing inequalities here and now.

(We should note also that the call to prayer came out earlier this month, but we only saw it recently via the Import AI newsletter because of the… events that have taken up so much of everyone’s time, energy, and general mental acuity in recent weeks.)

In his message, the pope said AI was “at the heart of the epochal change we are experiencing” and that robotics had the power to change the world for the better. But this would only be the case if these forces are harnessed correctly, he said. “Indeed, if technological progress increases inequalities, it is not true progress. Future advances should be orientated towards respecting the dignity of the person.”

Perhaps surprisingly, this isn’t new territory for the pope. Earlier this year, the Vatican, along with Microsoft and IBM, endorsed the “Rome Call for AI Ethics” — a policy document containing six general principles that guide the deployment of artificial intelligence. These include transparency, inclusion, impartiality, and reliability, all sensible attributes when it comes to deploying algorithms.

Although the pope didn’t touch on any particular examples in his video, it’s easy to think of ways that AI is entrenching or increasing divisions in society. Examples include biased facial recognition systems that lead to false arrests and algorithmically allotted exam results that replicate existing inequalities between students. In other words: regardless of whether you think prayer is the appropriate course of action, the pope certainly has a point.