Archives
« Monday Morning Commute: A Cascade of Comfort
Pope Francis wants us to pray that AI and robots “always serve mankind” which is wild. Prayers versus Skynet, I got Skynet. »

‘Horizon Forbidden West’ is launching in late 2021. Bank on it being the big holiday title, baby! 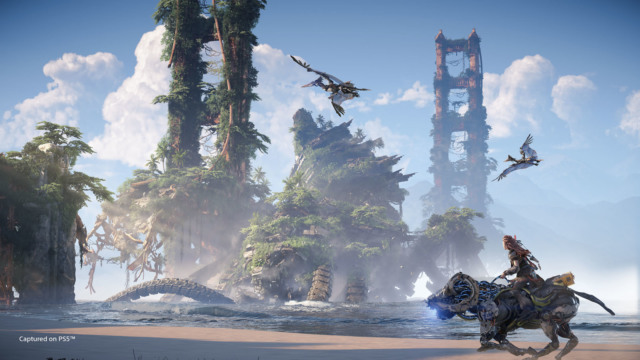 Sony’s come out and confirmed what I sort of assumed. That is, Horizon Forbidden West ain’t dropping until late 2021. Not a real big surprise, you know? It makes sense for this glorious son of a bitch to be next year’s big holiday exclusive.

Guerilla Games and Sony have been shy about Horizon Forbidden West’s release date other than a vague 2021 window, but they’re getting a little bit clearer. As Kotaku explains, Sony has shared a PlayStation 5 launch video indicating that Forbidden West will arrive sometime in the second half of 2021. While that’s still not very specific, it makes clear that you shouldn’t expect the open world PS5 (and PS4) game to tide you over this spring.

It’s a somewhat expected schedule, too. Guerilla and Sony only briefly teased the new Horizon game this June, and have shared limited details since — it would have been a pleasant surprise if a game on the scale of Forbidden West was ready just a few months after the PS5’s debut.

The PS5 calendar won’t be all that empty in the next several months. The Sony video reaffirmed that Gran Turismo 7 and Ratchet and Clank: Rift Apart are both due to arrive in the first half of 2021 barring delays. The Forbidden West timing is just a reminder that it usually takes a while for consoles to build up libraries of blockbuster games, even if titles started development well in advance.