Archives
« Monday Morning Commute: Meditation and Magic
AMC has pushed its reopening date to July 30. Fellas, you may just want to fucking wait before choosing a date. »

NASA says the oceans of Jupiter’s moon Europa may be habitable. Wait, fucking what? 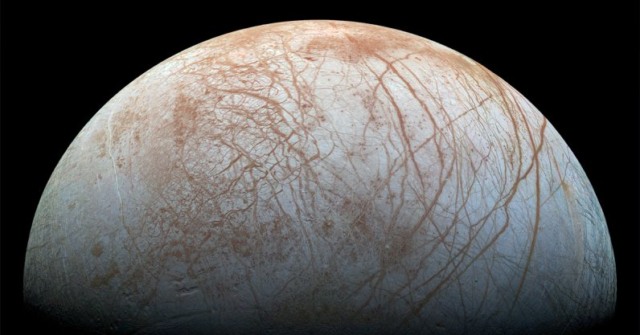 You know, with Reality on Fire, it’s easy to miss dope news like this. Check this shit out. The oceans of Jupiter’s moon Europa? May be fucking habitable.

A new study of the oceans of Europa suggest oceans on that giant moon may be habitable. But is there life?

The oceans of Europa may be habitable, according to a new model developed by NASA. This moon — 3,100 km (1,900 miles) in diameter — is the fourth-largest moon orbiting Jupiter. Although smaller than our own Moon, Europa is larger than Pluto.

The Voyager and Galileo spacecraft revealed images and data from Europa revealing vast storehouses of water beneath the surface of the giant moon. However, the chemical makeup of these extraterrestrial oceans remains uncertain. Using information collected during the Galileo mission, researchers from NASA’s Jet Propulsion Laboratory simulated conditions beneath these alien seas.

Orbiting around Jupiter, five times further from than Sun than is the Earth, Europa is, at a quick glance, a frozen world. However, under its frozen surface sit oceans far greater than those on our homeworld. Radioactive decay or gravitational forces from its massive partner heat the ice, melting it into massive, subterranean oceans. This heat also wears on mineral deposits, releasing water.

“We were able to model the composition and physical properties of the core, silicate layer, and ocean. We find that different minerals lose water and volatiles at different depths and temperatures,” Mohit Melwani Daswani, ,a geochemist and planetary scientist at JPL, explains.

The team found that the amount of mass they expected to find missing from the crust of Europa was nearly the same as the mass of the oceans, suggesting water on that world came from minerals found on Europa.

The study also suggested that worlds orbiting other stars may also form water through chemical and physical processes unfolding on mineral deposits.

I’ll have a large ocean, light on the ice
First discovered by Galileo Galilei in 1610, Europa is the smallest of the four large moons of Jupiter first spied by the legendary astronomer. Since its discovery more than four centuries ago, Europa has only become more wondrous.

“Scientists think Europa’s ice shell is 10 to 15 miles (15 to 25 kilometers) thick, floating on an ocean 40 to 100 miles (60 to 150 kilometers) deep. So while Europa is only one-fourth the diameter of Earth, its ocean may contain twice as much water as all of Earth’s oceans combined,” NASA describes.

Although Europa is likely to be as old as the solar system — four -and-a-half billion years of age — the surface is just 20 to 180 million years old.

Europa could offer one of the best places in the Solar System to find life, and this recent study makes such a possibility more likely. Previously, most researchers believed the oceans of Europa would be sulfur-rich. But, this new model suggests the waters of Europa would be laced with chlorides, much like the salty oceans of Earth.

Studies suggest vents, similar to those on Earth, could form on the ocean floor of Europa, feeding chemicals and warmth to the alien oceans.

Comets, drawn by the powerful gravitational force of Jupiter, would pummel Europa in vast numbers. Many of these icy visitors from the outer solar system would bring organic materials, sprinkling Europa with some of the basic building blocks of life.

And, much like Earth, chemical reactions on Europa produce 10 times as much oxygen as hydrogen. This quality might make the development of life on Europa even more likely.

However, how warm all these heating sources makes the water remains a mystery, worthy of exploration.