Asteroid Bennu is exploding rocks out into space and astronomers don’t know why. The Cosmos continues to confound! 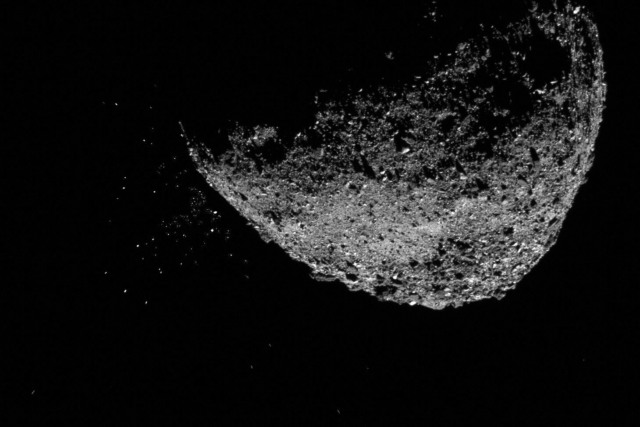 Asteroid Bennu more active than a motherfucker. Astronomers have spotted the asteroid exploding rockers out into space, and they’re stumped. Goddamn, the Cosmos is so damn interesting.

For the last year, NASA’s OSIRIS-REx spacecraft has been circling a large asteroid named Bennu that regularly passes uncomfortably close to Earth. The spacecraft has been painstakingly mapping the asteroid’s rocky surface using a suite of cameras and other instruments that will help it determine where to land next year. Once NASA selects a final landing site, OSIRIS-REx will kiss Bennu just long enough to scoop up a sample to bring back to Earth in 2023.

Many scientists expect the Bennu sample to revolutionize our understanding of asteroids, especially those that are near Earth and pose the greatest threat to life as we know it. But as detailed in a paper published today in Science, NASA has already started making surprising discoveries around this alien world. Earlier this year, the OSIRIS-REx team witnessed particles exploding from the asteroid’s surface—and it’s not sure why.

“No one has ever seen an active asteroid up close like this,” says Carl Hergenrother, an astronomer at the University of Arizona and the scientist who proposed Bennu as the target for OSIRIS-REx. “It wasn’t that long ago that the conventional wisdom was that asteroids are these dead bodies that didn’t change very much.”

In January, the navigation cameras on OSIRIS-REx captured three ejection events that each spewed about 100 centimeter-sized asteroid particles into space. The spacecraft also detected a significant number of particles already orbiting Bennu like a cloud of gnats. Their diverse orbits suggest that particle ejections are a common event on the asteroid and occur all across its surface, rather than in a few select spots. Indeed, in the year since the three ejection events that are reported today in Science, Hergenrother says OSIRIS-REx has detected several other smaller ejections.

Asteroid Bennu isn’t really “alive” because it doesn’t have a heated core necessary for geological activity, but as Hergenrother and his colleagues discovered, it’s not exactly dead, either. It’s a space zombie roaming the solar system, sneezing out small rocks. Some quickly return to the surface like a cannonball, while others escape into the vast emptiness of deep space. But what’s really intriguing, says Hergenrother, are the rocks that end up in orbit around Bennu and become miniature moons for a few days before returning to the surface.

“What we’re seeing is something we would have never been able to see from the ground,” Hergenrother says. “So the question that is still on our minds is are we seeing a lower intensity process that is similar to what happens on other active asteroids, or is this something entirely different?”

Scientists have seen massive ejections from about two dozen asteroids as they pass by Earth, but the mechanisms invoked to explain why these asteroids are ejecting material don’t work for Bennu. The centrifugal force of an asteroid’s spin, for example, could eject material from the surface, but it can’t account for the range of particle orbits seen by OSIRIS-REx. Likewise, the sublimation of ice water—the same phenomenon that produces a comet’s tail—can’t explain what’s happening on Bennu because OSIRIS-REx witnessed particle ejections on parts of Bennu that get way too hot to host ice.

Hergenrother says the OSIRIS-REx team has narrowed the mystery to two possible causes. One potential culprit is the extreme temperatures on Bennu, which range from 240 to -100 degrees Fahrenheit. The stress from this transition can cause particles to crack and fly apart like popcorn. Another possibility is that Bennu is getting bombarded with micrometeoroids that kick up the particles when they strike the surface.

Unfortunately, OSIRIS-REx won’t be hanging around Bennu long enough to resolve the mystery on its own, Hergenrother says. There is a lot more science to be done before the spacecraft departs for Earth, so the mystery of Bennu’s particle eruptions might have to be shelved—for now. But given how little we know about asteroids, Hergenrother says there’s a strong case to be made for a dedicated mission to study the phenomenon on another asteroid in the future.