Archives
« MIT’s got robot blocks that can self-assemble like Transformers. Oh, the robot apocalypse fixing to be wild!
Monday Morning Commute: well it ain’t perfect but i don’t mind [because it’s worth it] » 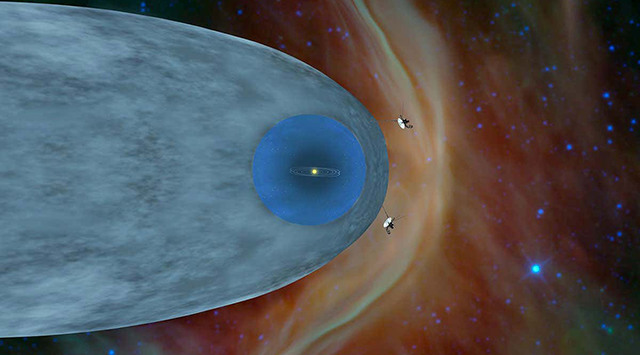 Man, what a dichotomy we are as humans. On one hand, we’re warring over fuels, Imaginary People in the Sky, and greed. Real monkey shit. At the same time? We’re getting data back from beyond the solar system, courtesy of Voyager 2! Interstellar space data!

The Voyager 2 mission has released its first scientific measurements of interstellar space, according to newly published research.

Voyager 2 crossed the heliopause last November, joining Voyager 1 as the only human-made objects to have left the heliosphere, the area around the Sun that is influenced by solar wind. Thankfully, Voyager 2’s instruments worked well enough to measure the particles and magnetic fields present in this distant region. Though its transition shares similarities with Voyager 1’s, these initial results have revealed a previously unobserved area of interaction between particles from space and particles from the Sun.

The Voyager probes launched in 1977, each equipped with an identical suite of instruments for exploring the outer solar system. After over 40 years, both are functioning well enough to measure cosmic rays from the Sun as well as from interstellar space; the properties of nearby charged particles; the local magnetic field; and, in the case of Voyager 2, the energy of the local plasma. (Voyager 1’s plasma-measuring instrument stopped working in 1980.) All this data can offer scientists insight into the nature of the interstellar medium.

Voyager 1’s broken plasma instrument made it hard for scientists to directly measure whether and when the probe had crossed the heliopause back in August 2012, as they couldn’t see the expected transition from the Sun’s hot plasma to the interstellar medium’s colder, denser plasma. Ultimately, measurements of the behavior of local electrons and magnetic fields confirmed that it had crossed the boundary.

Voyager 2 crossed last year with a functioning plasma instrument, confirming the past measurements and offering a first direct view of the transition, including a 20-fold increase in the density of the plasma, according to one of the papers published today in Nature Astronomy. The density is similar to the plasma densities inferred by Voyager 1’s scientists, with small discrepancies likely due to their differences in location.

The two probes’ heliopause crossings occurred at similar distances from the Sun: For Voyager 1, it was at 121.6 astronomical units, and for Voyager 2, it was 119 astronomical units (one AU equals the average distance from Earth to the Sun). That the plasma densities changed at similar distanced, even though the probes are more than 150 astronomical units apart, tells scientists that the heliopause doesn’t change much between these two radically different parts of the sky, plasma physicist Bill Kurth told Gizmodo. Kurth is one of the study’s authors and a scientist with the Voyager missions.

But plenty of things differed between the probes. Voyager 2 discovered a continuous change to the direction of the magnetic fields as it crossed the heliopause, while Voyager 1 didn’t see a change. Both missions saw sudden increases in the number of high-energy cosmic rays, but Voyager 2 continued to see lower-energy particles from the Sun. Voyager scientists published their results in five papers published today in Nature Astronomy (1, 2, 3, 4, 5).

These kinds of measurements might be a little in-the-weeds, but they’re crucial for astronomers’ understanding of space more generally; every star presumably has a similar boundary region between its sphere of influence and the local interstellar medium.

The Voyager probes are aging. Already, talks are underway regarding how to ration their remaining power, R. Du Toit Strauss, a senior lecturer at North-West University in South Africa, wrote in a Nature commentary. Researchers still hope to better understand the farther depths of the interstellar medium, beyond regions where solar particles still leak out of the heliosphere. They also hope to better understand the shape of the heliopause—the structure is supposed to have a long tail, like a comet, but no evidence of this tail has been found yet.

Scientists will meanwhile be milking the probes for all they’re worth. There won’t be another opportunity to take data on this region of space for a very long time—even if a new probe launched today, the edge of the solar system would lie decades away.