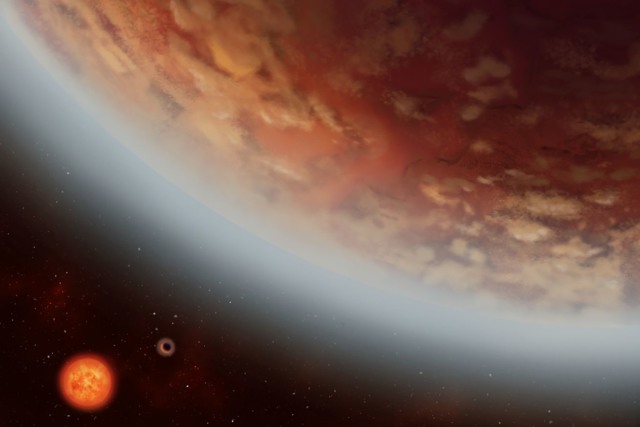 Oh fuck yeah, fellas! Astronomers have found a goddamn Super-Earth with water! In fact, the motherfucker may have rain. I’m ready. Packing my goddamn bags.

Water vapor has been found in the atmosphere of a distant planet that’s just over twice the size of Earth. It’s the smallest world yet found with water in its surrounding atmosphere, and it’s possible that it even rains liquid water there. That makes this world a tantalizing candidate in the ongoing search for extraterrestrial life outside our cosmic neighborhood.

Finding water around an exoplanet (a world outside our Solar System) is particularly exciting for scientists because water is a critical ingredient for life on our planet. It could equally be pivotal for life that exists elsewhere in the Universe. Researchers have found this precious molecule around exoplanets before, but these worlds have not been suitable places for life to thrive. They’ve been large balls of gas, similar in size to Jupiter or Neptune, lacking any kind of surface for life as we know it to exist.

This planet, detailed in a study that was published on arXiv and submitted to the Astronomical Journal and a study published in Nature Astronomy, is a bit more unique. Named K2-18b, it’s nearly nine times as massive as our own Earth, a type of world often referred to as a mini-Neptune. Worlds of this size are plentiful in our Galaxy but lacking in our own Solar System. K2-18b also orbits in a sweet spot around its host star known as the habitable zone where temperatures are just right for water to pool on a planet’s surface. That means this planet shares some very significant traits with our planet. “For the first time, a planet in this temperature regime — a regime that is very, very similar to the Earth — we are demonstrating that there is actually liquid water,” Björn Benneke, an exoplanet researcher at the University of Montreal and lead author on the study published in the arXiv, tells The Verge.

While finding water is a big deal for exoplanet researchers, it’s unlikely that this world is awash in oceans. In fact, it seems unlikely that the surface of the planet is rocky because of its size. “These planets are not going to look a thing like Earth,” Sara Seager, an exoplanet expert and professor at MIT who was not involved in this research, tells The Verge. “It’s definitely not rocky as we know a rocky planet to be.” K2-18b also orbits around a star very unlike our Sun. Altogether, these factors significantly decrease the chances that life could survive there.

Researchers first found K2-18b, thanks to NASA’s Kepler space telescope, a spacecraft located nearly 100 million miles from Earth that hunted for exoplanets for most of the last decade. Whenever an exoplanet passes directly between its parent star and Earth, it slightly dims the star’s light, which is a minuscule change that Kepler could detect. By observing these transits, Kepler discovered more than 2,000 exoplanets. In 2015, the spacecraft caught K2-18b, which is located 111 light-years away from Earth.

Then, in 2016 and 2017, Benneke and his team used NASA’s Hubble Space Telescope, currently in orbit around Earth, to learn more about K2-18b’s atmosphere. The chemicals and molecules that surround an exoplanet can tell us a lot about what might be lurking on the surface of the distant world. For instance, the significant amounts of methane in Earth’s atmosphere are a byproduct of the many biological organisms that live here.

Studying the atmosphere of an exoplanet is particularly tough for worlds that are similar in size to Earth. The light from these faraway space rocks is easily overpowered by the light coming from their parent stars, making them incredibly hard to see. And in order to figure out what’s in an exoplanet’s atmosphere, researchers need to observe light from the star as it filters through the “outer edges” of the world. When the light passes through the gas, it gets warped ever so slightly, indicating the types of molecules that are present. It’s an incredibly delicate — and challenging — measurement to make.

“Imagine you have a search light in London, and you’re observing it from New York,” Ingo Waldmann, an astrophysicist at the University College London and one of the authors on the Nature Astronomy study, tells The Verge. “And in that search light, you have a mosquito fly. That’s the exoplanet. Now, what we’re trying to do is we’re trying to figure out what the color of the wings are.”

Researchers got lucky with K2-18b because it has an atmosphere that extends far out into space, making it a bit easier to observe. “It’s a bit like a hybrid planet that maybe has a rocky ice core, but then most of its volume is actually gas,” Benneke says. Additionally, it orbits around a type of faint, small star known as a red dwarf, which doesn’t have as much light as a star like our Sun. That makes it easier to study planets that might be orbiting nearby.

Benneke and his team observed the planet as it transited eight times, allowing them to detect water vapor in the atmosphere. Then they did some climate modeling and found that the vapor is likely forming into clouds where water condenses and then raining down onto the planet — just like on Earth. “If you talk to any biologist, they don’t care about vapor; they care about liquid water,” says Benneke. “Because biology only works when you have liquid water.” Waldmann’s team at the University College London also analyzed the data gathered by Benneke and his team, confirming the existence of water vapor in the atmosphere, as well.

[Continue reading on The Verge]