Quantum teleportation has been used to send 3D information for the first time! Do I know what the fuck this means? Nope! Am I torqued? Yup! 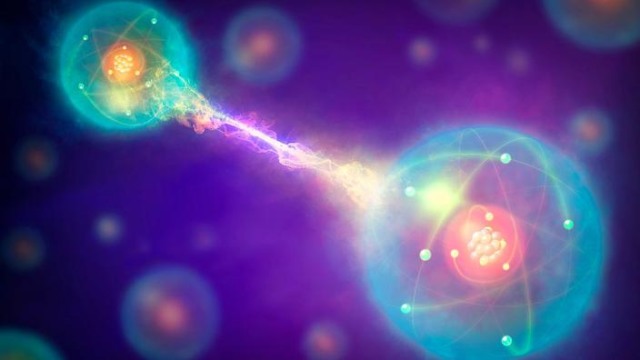 I got it out of the way in the headline, but I’ll reiterate. I don’t really know what the fuck this means, other than: it’s progress, and it’s got the words quantum and teleportation. Is that enough to excite me? You bet your glistening tits.

Quantum teleportation is the transfer of quantum information—for instance, a particle’s quantum state—between distant systems without moving a physical particle. All demonstrations of the phenomenon so far have transferred the state of a qubit—a simple two-level system. This is a far cry from teleporting the complete quantum state of a particle, involving multiple degrees of freedom, each with many possible values. A collaboration between groups at the University of Science and Technology of China, Hefei, and at the University of Vienna has taken a step towards that goal by demonstrating the transfer of a 3D quantum state, or qutrit.

The team shared a pair of entangled photons between the transmitter (Alice) and the receiver (Bob). Each photon could take one of three possible paths whose superposition yielded a 3D entangled state, a qutrit. An additional photon at Alice’s end—also in a 3D quantum state—provided the state to be teleported. The researchers made this third photon interfere with Alice’s half of the entangled pair and performed a state measurement on all three. This measurement resulted in the transfer of the 3D state to the photon held by Bob.

The scheme may be useful in high-speed quantum communications, since a qutrit can carry more information than a qubit. The approach could be generalized to teleport quantum states involving any degree of freedom with more than two levels (photon orbital angular momentum, for example). The authors also suggest that they could extend their scheme to an arbitrarily high number of dimensions by adding more paths for the photons. These features could eventually allow the complete state of a complex quantum particle to be transferred.

This research is published in Physical Review Letters.