Archives
« In Japan, Domino’s has a pizza with two-pounds of cheese. The fuck we waiting for, United States?
‘Doom Eternal’ Trailers: Prepare to rip and tear Heaven and Hell on November 22, 2019! »

Jupiter’s Moon Europa got the right kinda of water to support life. So. Well. You got that shit or not, Europa? 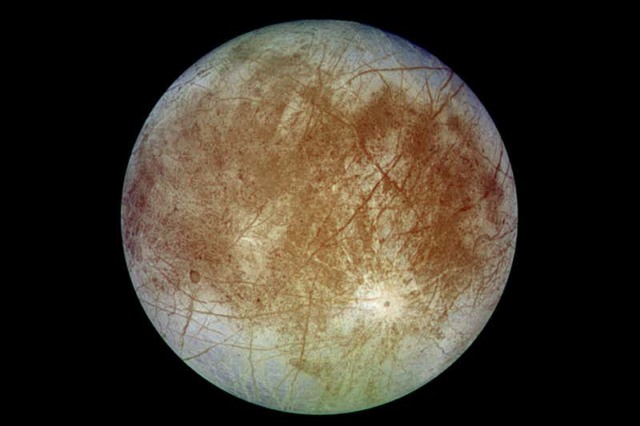 Jupiter’s Moon Europa got that salty water underneath its surface. Which, apparently, is the right kind of water to support life. Like, nice! Now, let’s see if it actually has it.

Europa, the oceanic moon orbiting Jupiter that many hope harbors extraterrestrial life, could have a similar chemical composition in its oceans to Earth’s saltwater.

Previous studies suggested that the water in Europa’s oceans contained salt made of sulfates. But now scientists who took a closer look with the Hubble Space Telescope think that the salt is sodium chloride, reports New Scientist, just like terrestrial sea salt.

It’s a good sign in the search for otherworldly life, as it suggests that Europa could be more hospitable than we assumed.

Taking Stock
The CalTech scientists behind the research, published Wednesday in the journal Science Advances, think Europa’s oceans contain sodium chloride because of a yellowish hue on the moon’s surface. They suggest that the color comes from the salt interacting with cosmic radiation.

“We’ve never actually measured an ocean with primarily sulfates for salts,” project leader Samantha Trumbo told New Scientist. “If it’s sodium chloride instead, that means it’s more like Earth. If you licked it, it would probably taste familiar and salty.”

Hold Up
Just because a distant moon’s oceans may be more hospitable to life than previously assumed doesn’t mean there’s life hiding out there.

Europa seems like a good place to find life, but that’s in comparison to the rest of the universe in its cold, empty entirety. No one has actually spotted signs of life — Europa just happens to have better conditions than most places that scientists have investigated.