Archives
« Hideo Kojima teases ‘Death Stranding’ news coming on May 29. I still don’t believe this game is real.
Omega Plays: Dead Cells – Part Something – Alongside our ‘Dead Cells’ master of a friend! »

Mars has massive amount of water frozen beneath its North Pole. Can we go there, yet? Please? 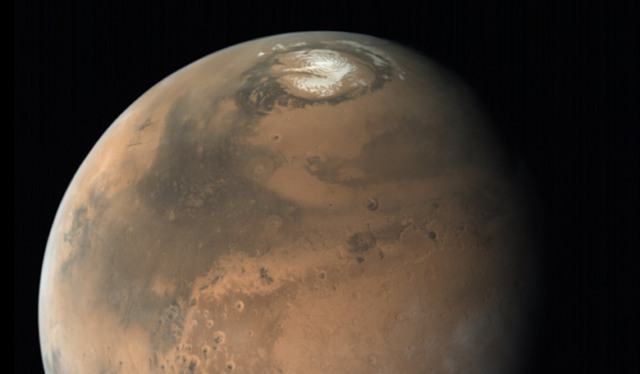 I say g’damn! Scientists have identified a massive amount of fucking water frozen beneath the Martian North Pole. How much, you ask? Well if it were to melt, it would submerge the entire planet.

Using ground-penetrating radar, scientists detected a massive reservoir of frozen water sandwiched by layers of sand beneath the northern polar ice cap on Mars. This reservoir contains so much ice that, if melted and brought to the surface, it would submerge the entire planet.

“This was a surprise even for us,” Stefano Nerozzi, the lead author of the new paper and a PhD student at the University of Texas at Austin, told Gizmodo in an email.

The massive reservoir was detected within Mars’ northern cavi unit, a deposit of multiple layers of water ice mixed in with sand that formed over the course of hundreds of millions of years. The cavi unit rests about 2 kilometers (1.2 miles) beneath the Martian north pole, and prior to the new study, scientists figured it was primarily composed of sand dunes and contained less than 50 percent water ice by volume. These estimates were based on observations of visible outcrops, which revealed significant amounts of dark sands intermixed with small amounts of frozen water.

But now, radar scans from orbit suggests the cavi unit is packed with more water ice than sand, making it possibly the third-largest water reservoir on the Red Planet, followed only by the two polar ice caps. The new paper was published this week in Geophysical Research Letters.

These new observations were made by the Shallow Radar, or SHARAD, instrument aboard NASA’s Mars Reconnaissance Orbiter. SHARAD emits surface-penetrating radar waves that allowed Nerozzi’s team to discern the internal structures and composition of the cavi unit.

Observations revealed horizontal slabs rich in ice that were sandwiched by alternating layers of sand. The distribution of water ice ranged from 61 to 88 percent by volume, which means the cavi unit is primarily composed of frozen water. As noted in the press release, if melted and brought to the surface, “the newly discovered polar ice would be equivalent to a global layer of water around Mars at least 1.5 meters (5 feet) deep.” That’s a lot of water.

SHARAD data showed that the frequency and volume of the ice slabs increased with proximity to the north pole. In one region, for example, the researchers detected two sand sheets over 40 kilometers (25 miles) wide on top of a layer of ice ranging in depth from 50 to 100 meters (165 to 330 feet).

These buried structures are the remnants of former ice caps which shrunk and were buried during warm periods, according to the paper. Consequently, this cavi unit contains a historical record of the Martian climate. The layers of ice are like the rings on a tree, showing the growth and retreat of ancient polar caps over the years. Like Earth, Mars has experienced multiple ice ages. During the warm periods, sand enveloped the shrunken ice caps, protecting them from the Sun and in turn preventing the ice from evaporating into the atmosphere.

“The only hypothesis that can reconcile our results and all the previous studies is that the cavi unit is made of alternating ice sheets, remnants of former polar caps, and sand layers, which acted as protective blanket and prevented the complete retreat of the old polar ice,” Nerozzi told Gizmodo. “This is another big surprise in itself, because it means that we have a new and unexpected record of past polar ice cap growth and retreat that dates back hundreds of millions of years.”

Prior to the new study, scientists figured the ancient ice caps were lost, but SHARAD data suggests otherwise.

“These results are significant because it attests to past climate cycles in the north polar region,” Matthew Chojnacki, a planetary scientist at the University of Arizona who was not involved in the new research, said in an email to Gizmodo. “For tens of millions of years, maybe longer, wind built up massive sand deposits which were repeatedly buried with various levels of ice. These intra-dune ice deposits happen on Earth but I’m not aware of such a large example as this north polar cavi unit on Mars.”

The new finding could also tell us a bit more about water ice located elsewhere on Mars, particularly in the lower latitudes. Jack Holt, co-author of the study and a researcher at the University of Arizona, previously used SHARAD to confirm the presence of massive glaciers in the Martian mid-latitudes—one of which is three times the size of Los Angeles. These glaciers are almost completely comprised of water ice, but they’re obscured by surface materials.

“Surprisingly, the total volume of water locked up in these buried polar deposits is roughly the same as all the water ice known to exist in glaciers and buried ice layers at lower latitudes on Mars, and they are approximately the same age,” said Holt in the University of Texas press release.

Mars, as we’re learning, holds a tremendous amount of water. This theoretically bodes well for future colonists in need of the precious liquid.