Archives
« Microsoft and Sony form cloud gaming partnership. Love CAN bloom on the battlefield, friends!
Robert Pattinson has been cast as ‘The Batman’ and I’m all the way in on this [Updated: Deadline says it ain’t official-official] »

Milky Way Galaxy has holes in it from a “dense bullet” of something. Scientists got no idea, and I love it 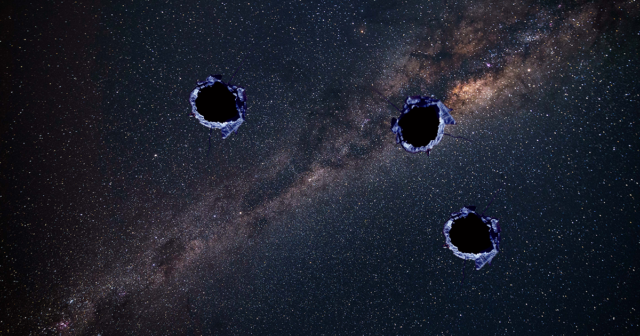 Another day, another fucking mystery in the cosmos. The latest? Oh, you know. The Milky Way Galaxy has fucking holes in it from a dense bullet of something. Amazing.

Something appears to have torn a hole in part of the Milky Way’s halo. The “dark substructure” was found via Gaia observations—a project set out to produce the most detailed 3D map of our galaxy—with Harvard scientist Ana Bonaca noticing a perturbation in a tidal stream.

She presented her findings at the American Physical Society’s April meeting.

As first reported by LiveScience, Bonaca was focusing on tidal streams produced by stars escaping from globular clusters—normally found at the edges of a galaxy. The stellar halo of the Milky Way is full of these tidal streams.

If there is nothing to disturb them, the streams are almost uniform in terms of their density. However, Bonaca noticed there was a hole in one. “The on-sky morphology suggests a recent, close encounter with a massive and dense perturber,” an abstract to her work reported.

What this “perturber” is, however, is unknown. “It’s a dense bullet of something,” Bonaca told LiveScience. Telescopes failed to find the source—so what could it be?

The hole is enormous, so whatever made it must also have been. “It’s much more massive than a star,” she told the website. “Something like a million times the mass of the sun. So there are just no stars of that mass. We can rule that out. And if it were a black hole, it would be a supermassive black hole of the kind we find at the center of our own galaxy.”

The problem with this idea is that there are no signs of a supermassive black hole in the vicinity.

At the moment, observations do not show any large luminous object (something made from ordinary matter, which reflects light) moving away from the hole. This led Bonaca to suggest the perturbation could have been made by dark matter. This is the mystery substance that makes up about 27 percent of the universe. Scientists know it is there because of the gravitational force it exerts on normal matter—but because it is “dark,” in that it does not reflect light, we cannot see what it is.

If it was a dense blob of dark matter that smashed through the tidal stream, it would be an exciting find for scientists, as it would provide them the opportunity of studying the elusive substance. The discovery of a dark matter “bullet” would also fit with current predictions about what dark matter is like—research suggests it is “clumpy,” in that it is not smooth and evenly distributed around the universe.

Identifying a clump of dark matter “opens up the possibility that detailed observations of streams could measure the mass spectrum of dark-matter substructures and even identify individual substructures,” her abstract concludes.

Bocana’s research is still in the early stages. She is yet to publish her findings in a peer-reviewed journal—however, LiveScience reports her presentation was welcomed by attendees.