Archives
« Richard Madden in talks to join Marvel’s ‘Eternals’ and I’m torqued. Dude was so good in ‘Bodyguard’ and yeah I guess ‘Thrones’
Marvel has revealed MCU Phase 4 release dates for next 8 fucking movies. It’s plotted through 2022, folks! »

Microsoft has patented an XBox controller with braille display. Accessibility++ 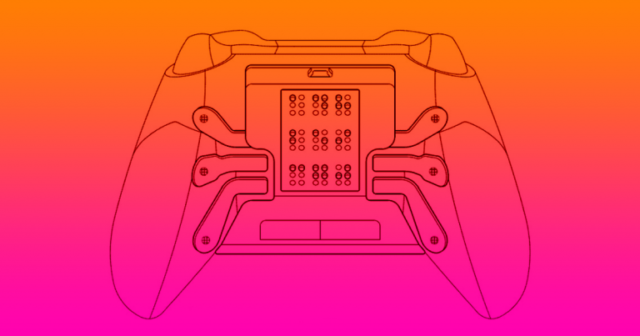 Microsoft already has an adaptive controller to increase accessibility for gamers. That said, they’re not fucking done. Nope! The company has patented an Xbox controller with a braille display. Pretty gnarly.

A few months ago, Microsoft launched the Xbox Adaptive Controller for disabled gamers. The device has impacted the lives of many already, but it seems like Microsoft wants to take accessible gaming even further. Today, LetsGoDigital spotted a patent which incorporates a Braille panel into an Xbox Elite Wireless Controller.

The Braille panel in the back seems to constantly adjust itself, so that gamers who are blind or have other visual impairments can read the text through the back of the controller. That’s not all though, the patent says that the controller will also be able to convert speech to Braille, allowing users to communicate in chat or when they’re livestreaming.

The World Intellectual Property patent goes into great detail about other features as well. For example, there are six Xbox Elite Controller-like paddles in the back which can be used for a variety of functions.

The Xbox Adaptive Controller was a welcome surprise, so there’s hope that the Xbox Braille controller makes its way to consumers one day. We know a lot of gamers who have visual disabilities and this would help them immensely. However, keep in mind that just because there’s a patent, it doesn’t mean that it’ll be manufactured. The controller has to work and pass through a number of tests first.