Drake gave Arya a shoutout at Billboard Music Awards, thereby condemning her to death on ‘Game of Thrones’ 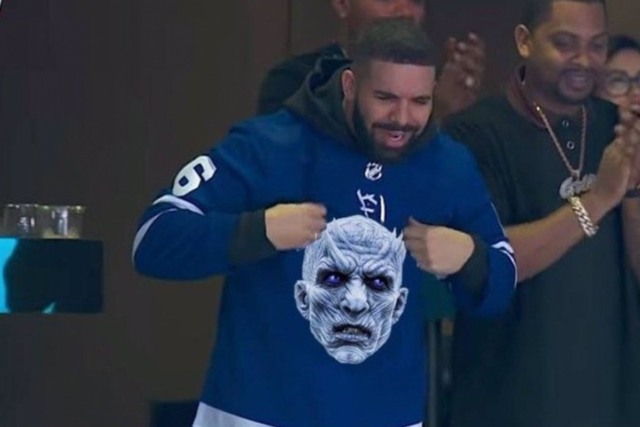 Drake’s endorsement of a sports team usually condemns them to playoff heartbreak. So, ya’ll fans of Arya might want to say a novena. ‘Cause last night the rapper dropped a shoutout to her at the Billboard Music Awards, which can only mean one thing. Logically.

Game Of Thrones fans now hope the Drake Curse doesn’t extend to fictional characters after he praised the show’s newest hero during his Billboard Music Awards acceptance speech. After being awarded Male Artist Of The Year, Drake made it a point to big up Arya Stark for “putting in that work” during the show’s most recent episode.

Spoiler Alert: During the much anticipated Battle of Winterfell, Arya Stark killed the Night King, leader of the White Walkers, with the Valyrian steel dagger given to her by her brother Bran. Drake, apparently a fan of the slick move she used to pierce the Night King’s heart and end the threat of the ice zombies from the north, decided to show his appreciation during his speech. There’s just one problem: The Drake Curse is starting to look like a real thing lately, and that has fans plenty worried about Arya’s future prospects as a possible successor to the Iron Throne.

The dreaded Drake Curse is a half-joking phenomenon fans cooked up after noticing that teams and athletes Drake openly supports tend to lose their next big matchup. The curse supposedly hurt Alabama in this year’s college football championship, purportedly caused Serena Williams the US Open in 2015, got the Kentucky Wildcats eliminated in 2013, caused the Golden State Warriors’ 2016 collapse in the NBA Finals against the Cleveland Cavaliers, and has generally been credited with any calamitous athletic meltdown in recent years when fans dig up images of Drake wearing team apparel. There was even a joke about Drake supporting the Night King, with fans photoshopping the villain’s face on one of the Canadian star’s hockey jerseys after the episode aired.

Of course, the curse only gets so much mileage; Drake himself joked about breaking the curse when his hometown Toronto Raptors advanced in this year’s NBA playoffs — although they’re now 1-1 against the Philadelphia 76ers after dropping a game at home. So, will the Drake Curse rear its head in next week’s Game Of Thrones episode? If Arya joins the shows (massive) death toll, you can be sure the fans will let him hear about it.