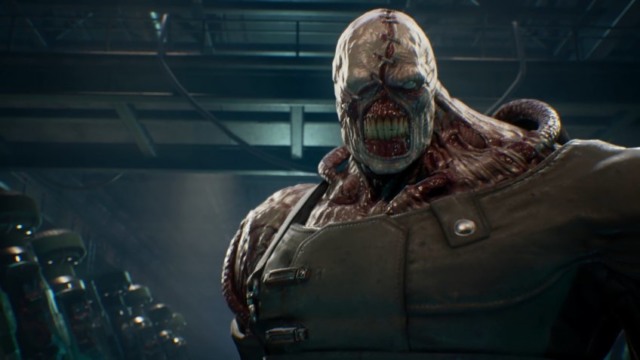 Capcom! They’re teasing a Resident Evil 3 remake. And given the success of RE2make, it makes all the sense in the fucking world.

Given the success of this year’s Resident Evil 2 remake, not only is it possible Capcom will continue on with a remake of Resident Evil 3, it seems pretty likely at this point. In the past, Capcom teased that a remake could happen if the demand is there (and the demand is certainly there). Meanwhile, numerous reports and rumors have already surfaced suggesting that development of the remake has actually already begun, including a report/rumor that surfaced this past March. That all said, recently Capcom has been teasing something Resident Evil 3 related on the series’ official Twitter account, and surely it’s the remake.

So why do Resident Evil fans think these tweets are teasing Resident Evil 3? Well, the second teaser features a massive hole in the wall located in the bathing room of the RPD building. Clearly something has broken through it. The thing is, this is before Mr. X is in the station, so it can’t be from him. That said, given that Resident Evil 3 partially takes place before the events of Resident Evil 2, means the hole could be from Nemesis, who chases the aforementioned Jill Valentine around the RPD.

None of the teasing in question is blatant, and of course, you shouldn’t take any of it to the bookies as a reason to bet on the existence of a Resident Evil 3 remake. However, Resident Evil fans seem pretty confident that Capcom is working on exactly that.