Archives
« ‘Hyper Light Drifter’ getting animated series from ‘Castlevania’ producer. I’m here for this, my dudes
Watch: That ‘Avengers: Endgame’ theory where Ant-Man kills Thanos through his ass has a a video » 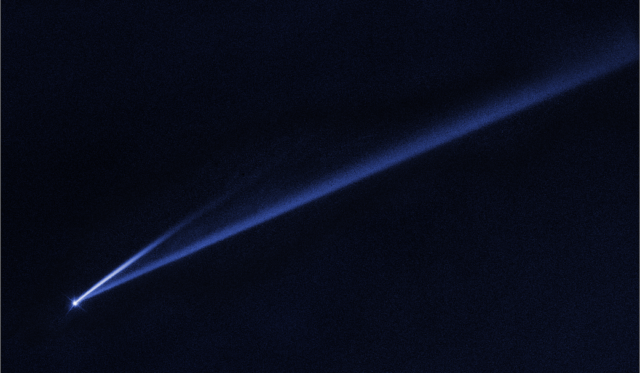 Even in death, the cosmos comes off sublime. For example, here is an image the Hubble captured of an asteroid spinning itself apart.

A small asteroid was caught in the process of spinning so fast it’s throwing off material, according to new data from NASA’s Hubble Space Telescope and other observatories.

Images from Hubble show two narrow, comet-like tails of dusty debris streaming from the asteroid (6478) Gault. Each tail represents an episode in which the asteroid gently shed its material — key evidence that Gault is beginning to come apart.

Discovered in 1988, the 2.5-mile-wide (4-kilometer-wide) asteroid has been observed repeatedly, but the debris tails are the first evidence of disintegration. Gault is located 214 million miles (344 million kilometers) from the Sun. Of the roughly 800,000 known asteroids between Mars and Jupiter, astronomers estimate that this type of event in the asteroid belt is rare, occurring roughly once a year.

Watching an asteroid become unglued gives astronomers the opportunity to study the makeup of these space rocks without sending a spacecraft to sample them.