Archives
« Earth may partly be made from interstellar rocks from this galaxy. How fucking gnarly is that?
James Gunn has been rehired to direct ‘Guardians of the Galaxy Vol. 3’ and this rules so hard » 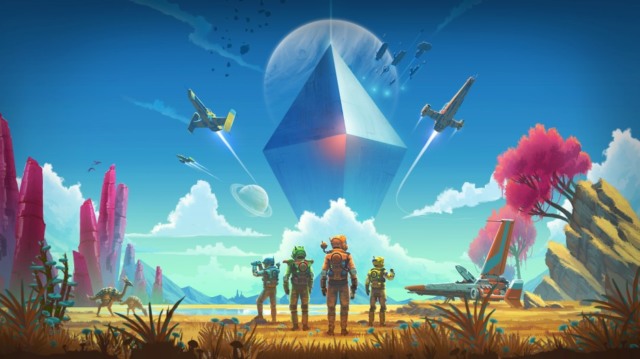 I fucking love the fact that Hello Games could have just called it a day when No Man’s Sky dropped, and well, everyone thought it was ass. Instead, they’ve just been grinding away, turning it into a dope experience.

Sandbox spacetourism survival sim No Man’s Sky will expand again with another honking great free update this summer, developers Hello Games announced today. No Man’s Sky: Beyond, they call it. While details are still shrouded in the mists of marketing schedules, Hello do say they plan to expand the multiplayer with “a radical new social and multiplayer experience.” The teaser trailer announcing all this shows the opposite, one single spaceman standing by one single spaceship, so what it actually involves is anyone’s guess. It is a nice spaceship, mind.

“No Man’s Sky Online includes a radical new social and multiplayer experience which empowers players everywhere in the universe to meet and play together,” Hello Games said in today’s announcement. “Whilst this brings people together like never before, and has many recognisable online elements, we don’t consider No Man’s Sky to be an MMO – it won’t require a subscription, won’t contain microtransactions, and will be free for all existing players.”

I mean, you don’t need subscriptions and microtransactions to be an MMO so I have no idea what Hello define an MMO as or what that means for NMS Online? I’ve asked ’em but don’t expect to get a firm answer because we’re still in that vague teaser phase.

I understand they’ve learned to be vague about their plans to avoid building expectations too much and disappointing folks again, but the vagueness is a bit silly if you’re bigging up a “radical” new thing.

The NMS: Beyond update will roll Online together with two other lumps that Hello had initially planned to launch as separate updates before deciding to roll the lot together. No, they don’t say what those parts are either. The point is: SPACESHIPS!

Tags: no man's sky, no mans sky beyond update