Jupiter could be cracking its moon Europa with its thunderous magnetic field. I say, g’damn! 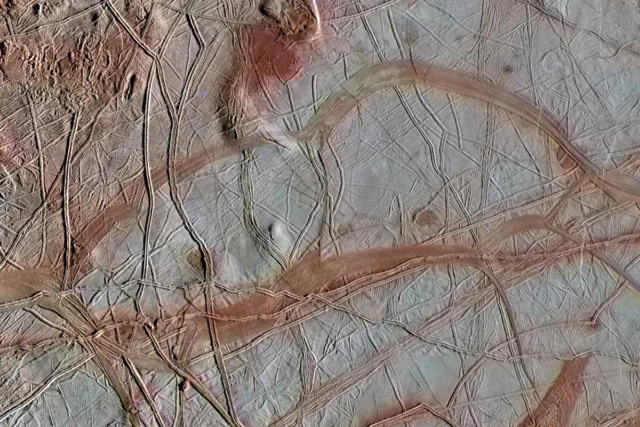 Yo, Jupiter! Fucking chill, bro. Apparently you may be cracking your moon Europa with your tremendous magnetic field. Which, okay I’ll grant you, is pretty fucking bad ass.

A pair of researchers, one with École Normale Supérieure, the other Laboratory for Studies of Radiation and Matter in Astrophysics and Atmospheres has found evidence that Jupiter’s magnetic field could be causing a jet stream in Europa’s underground ocean. In their paper published in the journal Nature Astronomy, Christophe Gissinger and Ludovic Petitdemange describe their analysis of data from the Galileo spacecraft and what they found.

The researchers started by noting that Jupiter has a very strong magnetic field—strong enough to reach and impact its moons. They also noted that Europa’s underground ocean is salty. A magnetic field influencing a salty sea would result in the conduction of electricity, likely creating a jet stream in the ocean. To find out what sort of movement might occur and to uncover other possible impacts of the magnetic field on the moon’s ocean, the researchers created numerical simulations. The simulations showed a jet stream forming somewhere near the moon’s equator, moving as fast as a few centimeters per second and flowing opposite of the moon’s spin. Such an opposite flow, the researchers further noted, would result in stress on the moon’s surface, which could occasionally form cracks. This would explain the surface cracks observed on Europa by other researchers. They further note that not all of the energy from the magnetic field would be transferred to the ocean—some of it would dissipate off the moon, likely around the poles. And if that were the case, there would be evidence of the moon’s ice shell becoming thinner as melting water made its way to the surface. And again, that is just what has been observed—plumes of water spurting out from spots near the poles.

The researchers suggest a jet stream on Europa could be compared to the Gulf Stream back here on Earth. Notably, our jet stream has been found to move compounds around in the ocean that are important for life. If Europa harbors life, its jet stream could be serving the same purpose.