Archives
« ‘Godzilla: King of the Monsters’ Trailer: Check out some seriously gnarly monster mayhem
Sony says they know we want single-player games and this is rad as fuck » 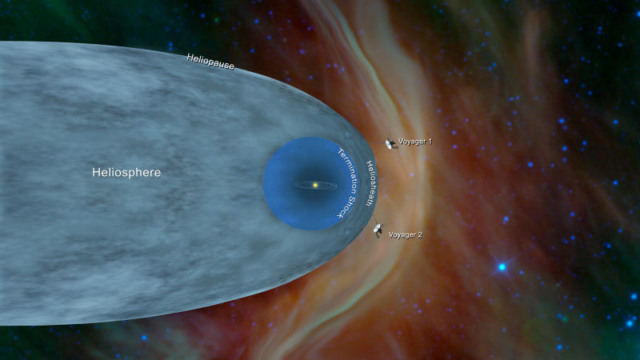 Feeling blue? Humanity got you down? Well, check this shit out. NASA announced that Voyager 2 has entered interstellar space. In other words, we got two fucking probes that have left our solar system. If that doesn’t tickle your tits I don’t know what does.

When you hit your 40s, it’s only natural to want to try new things.

That little platitude holds true not only for those suffering midlife crises, but also, apparently, for at least one spacecraft launched by NASA. Just a few months after celebrating its 41st birthday, the Voyager 2 probe has left its familiar environs and entered interstellar space — only the second human-made object in history to do so, after Voyager 1 did it in 2012.

“I think we’re all happy and relieved that the Voyager probes have both operated long enough to make it past this milestone,” Suzanne Dodd, the Voyager project manager at NASA’s Jet Propulsion Laboratory, said in a statement released Monday. “This is what we’ve all been waiting for.”

The moment they were waiting for arrived early last month, when Voyager 2 left what’s known as the heliosphere — the vast bubble of plasma and particles generated by the sun and stirred in solar winds. This bubble ends at a boundary called the heliopause, where the sun’s magnetic field peters out and solar winds give way to interstellar space.

NASA concluded the probe had crossed the heliopause when a key instrument on board “observed a steep decline in the speed of the solar wind particles on Nov. 5,” the JPL said. “Since that date, the plasma instrument has observed no solar wind flow in the environment around Voyager 2, which makes mission scientists confident the probe has left the heliosphere.”