Archives
« Boba Fett movie in the works because Lucasfilm doesn’t fucking get it. But, it’s got James Mangold writing and directing at least
Streaming! Tonight! Come be (Sonic) Maniacs with us! » 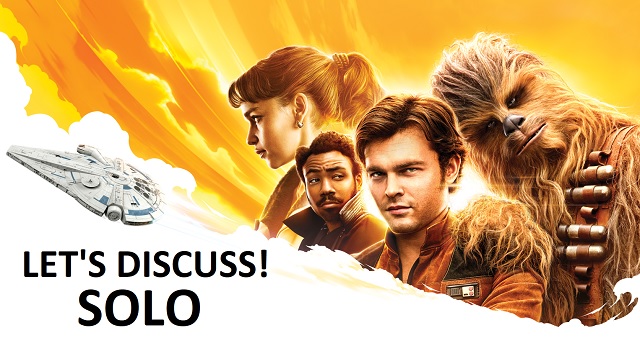 It happened — SOLO has been released.

As a lifelong believer in the Force, I made my way to the first showing I could find. And now, I’m going to cannonball into a stream-of-conscious review/reaction of the tenth theatrically-released STAR WARS movie.

Of course, I’m much more interested in your reactions — so hit up the comments section and share your thoughts about the fourth post-prequel installment.

Of course, SPOILERS AHEAD!

SOLO is one hell of a fun time!

Do  I think it’s the best STAR WARS movie ever? No. Would I have enjoyed it nearly as much if I weren’t a lifelong fanboy? Probably not. But is it an enjoyable addition to the franchise? Absolutely!

Alden Ehrenreich is a worthy successor to Harrison Ford — no doubts about it. At no point during the movie did I stop and think to myself, “He’s trying to be Han” or “I miss Harrison Ford” or anything like that. I simple sat back and watched Han Solo on the screen. I was immersed in this movie, and Ehrenreich’s performance was integral to this.

Now, to be fair, there’s no replacing Harrison Ford. His performances as Solo will probably always be the definitive ones to me. However, Ehrenreich holds his own and gives the character a second set of shoulders to wrap its arms around. I suppose I finally understand what it’s like to be a 007 fan who’ll always consider Connery their James Bond, but enjoys some of the other performers’ takes on the character as well.

Because I’m a glutton for punishment, I’ve been reading through the “Rotten” reviews on RT, and I’m just not getting where the criticism is coming from. Is it a perfect movie? No. Would it jumpstart a franchise if it were the first installment? Probably not. But for those of us who’re already invested, it is an absolute blast.

This…this might just be me explaining how much of a fanboy I am.

I don’t know. But I have to admit the possibility.

On the other hand, SOLO gave me a lot of the stuff that I felt was missing from ROGUE ONE. I cared about the characters, and not just the familiar ones. Beckett and L3 and Rio and Qi’ra were all compelling in their own ways, and I felt it when the first three in that list bit the dust.

While everyone went bananas over the Vader cameo in R1, I thought it was a bit shoehorned into place and out of character for what we’ve seen on screen for the character. On the other hand, bringing back Darth Maul? It’s a crazy-ballsy move, but it adds extra motivation for both Dryden Vos and Qi’ra. Moreover, it helps establish some possibilities for other installments in the franchise. I mean, c’mon — who doesn’t want to see Ewan McGregor playing a PTSD-addled Kenobi who once again has to fight the demon that killed his master?

And hell, everyone knows it was a mistake to kill off one of the coolest-designed characters in his first appearance.

We also get a definitive answer as to whether or not Han shoots first…I mean, what’s not to like about this movie?!

Okay, so I’ve laid it all on the line — I had one hell of a great time with SOLO! I’m too tired and scatterbrained to write any more. But hopefully your comments will get the discussion going!

Did you enjoy SOLO? Did you not? Don’t spare my feelings — I know that I might be succumbing to Force-poisoning!