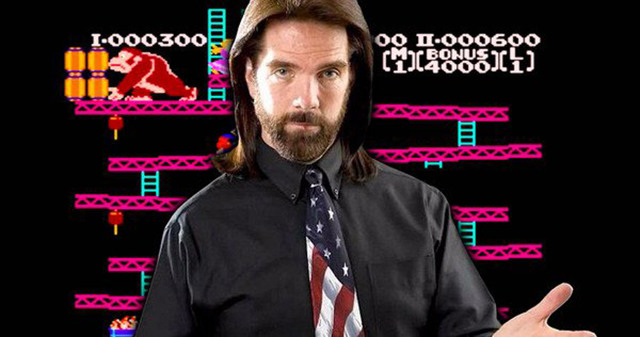 Man, Billy Mitchell. That name brings me way, way back. We used to talk a lot about the UberDouche back in the day, when Steve Wieber, him, and others were vying for Donkey Kong supremacy. Well, look at this shit. Every time dude was back on top, it was fraudulent as fuck.

Back in 2007, there was a hit documentary that arrived by way of the Slamdance Film Festival called The King of Kong: A Fistful of Quarters. The film from director Seth Gordon follows two expert gamers who are racing for the record to be the first player to ever reach 1 million points on the classic arcade game Donkey Kong.

The story at the center of The King of Kong is an underdog sports tale that could go toe-to-toe with the likes of Rocky, The Karate Kid, Rudy and more. Steve Wiebe was portrayed as the hero, a family man looking to achieve a goal that would bring some glory into his life. Meanwhile, Billy Mitchell was painted as the villain, who ended up triumphing over our hero and becoming the first player to hit 1 million points. But a recent development reveals that Billy Mitchell cheated.

Twin Galaxies, the world’s largest tracker of video game world records, announced today that after months of research, they believed that Billy Mitchell had cheated to achieve his record score of 1,047,200 on Donkey Kong. Therefore, they have stripped Mitchell of his Donkey Kong score record and all of his other video game high scores submitted over the years.

Since Twin Galaxies helps the people at the Guinness Book of World records to validate video game scores, presumably the latter will no longer acknowledge the scores of Billy Mitchell either, but they haven’t made an official announcement on that matter yet. This certainly doesn’t bode well for the mulleted man.

How Did Billy Mitchell Cheat and What Does This Mean?

You might be thinking to yourself that it must be difficult to cheat on a classic arcade machine, and you’d be right. Billy Mitchell’s recorded game shows him achieving the aforementioned high score from emulation software rather than a genuine arcade machine. Since that’s a requirement in order to earn an official Twin Galaxies record score, and he intentionally deceived the organization, he has been labeled a cheater and will no longer be allowed to submit scores.

The investigation was completed by Twin Galaxies themselves and at least two different third parties. Everyone conducted their own explorations and came to identical conclusions. Several other experts, hobbyists, and casual observers participated and contributed to this investigation.

With Billy Mitchell’s score cast aside, this means Steve Wiebe is now considered the first player to achieve one million points on Donkey Kong. This feels like there should be a whole documentary sequel, or at least some kind of short or supplementary feature, chronicling this investigation and the outcome. Hopefully, someone had cameras rolling during this whole process and maybe we’ll get a follow-up at some point, if only so we can see what other hideous neckties Billy Mitchell has acquired over the years.