Archives
« Russo Bros. would be interested in a ‘Secret Wars’ movie after Fox/Disney deal goes through
‘Atomic Blonde’ sequel in the works, Charlize Theron confirms. Praise the ultra-violent, ultra-violet gods »

‘Final Fantasy XV’ getting four new DLCs in 2019 because they gotta make that gil back, bro 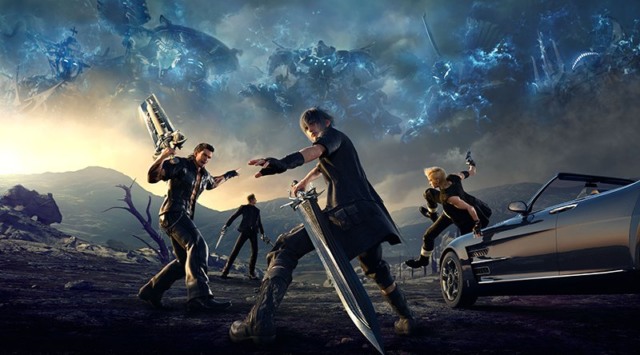 Oh fuck, Square has announced that Noctis and Bros are getting new content in 2019. The content just keeps coming and it seems as though Final Fantasy XV ain’t ever going away, folks! And, why should it? Despite it being approximately 50% of a game, people seem go go apeshit for it! Well, at least a good portion of people, and I even enjoyed that first 50%.

Final Fantasy XV has already seen some story based DLC this year, but at PAX East there was an announcement from Square Enix regarding four add-on story packs coming to the game in 2019. The Dawn of the Future DLC hopes to set itself apart from other story-based add-ons by creating an entire season of alternate plot branches, building towards (what appears to be) a completely different ending.

The episodes will portray an “alternate grand finale” for the game, showing “a future everyone longed for,” meaning a possible outcome that could have existed for each of four characters:

The first full episode will focus on Ardyn and is tentatively titled The Conflict of the Sage. The episode “portrays the struggles of Ardyn. Witness the resentment he harbored toward Lucis for over 2000 years, and his clashes with the Astrals.” A smaller “side story” episode will focus on Aranea Highwind of the Niflheim Empire and will focus on the Starscourge disease. “The final day of the Empire turns out to be Aranea’s worst day,” Square Enix teased.

A third episode will let you play as Lunafreya and has the working title The Choice of Freedom. The story is “about Luna’s fate, which not even death can free her from. Her battle to save the one she loves overturns the destiny dealt to the Lucian King.” The final episode is titled The Final Strike and focuses on Noctis “parting way with the Astrals” as he “embarks upon his final battle in order to attain the ideal future for all his people.”

While I’d normal have reservations about going all Butterfly Effect with a story as complicated as Final Fantasy XV, it is a Final Fantasy game, so the most appropriate conclusion is make me wait a year to do a bunch of fighting that leaves me bewildered over the power and scope of love… or time… or the energy of love time.