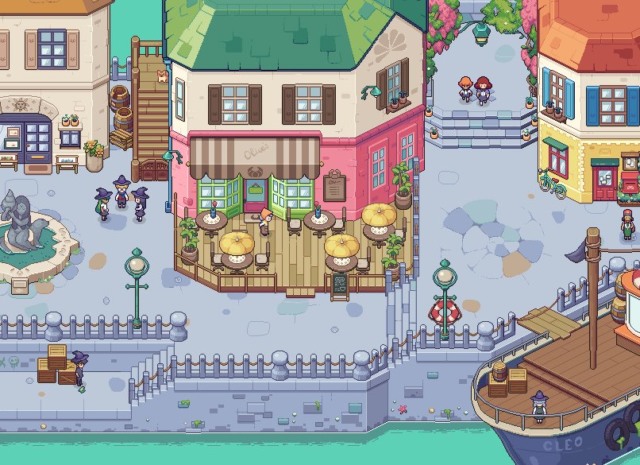 MAGICAL. NEW. IMAGE. A fucking fun pun to end all pun fun. Yee. Haw! I don’t know, I haven’t played Stardew Valley, but I want to. Probably never will, given the current climate of my gaming backlog and the geopolitical sphere. If North Korean nukes don’t prevent me, then having to play through all the titles moaning at me will.

But! This new teaser is cute.

OH! Just before the weekend Chucklefish CEO, Finn Brice (Chucklefish being the publishers of Stardew Valley but ALSO devs of their own games including Starbound) popped up a teaser image for their magic school RPG/sim project. It’s been described by Brice in the past as “something like Stardew Valley meets Harry Potter” and this image is reminding me of any number of nice sims I used to play on Nintendo handheld consoles…
The obvious comparison is probably Little Witch Academia but I’m going to suggest we go with the hope that it’s a reworking of The Worst Witch books. Or Meg and Mog. I LOVE a bit of Meg and Mog, although I probably couldn’t cope with the emotional rollercoaster of Mog having a case of the mumps again. Poor Mog 🙁 So poorly!

Anyway, I think the language of that first tweet struck a bunch of people as being unclear, especially as Chucklefish also have another game in the works (an Advance Wars-y, Fire Emblem-y thing) and are continuing to support Starbound so Brice followed up with:

“To everyone asking, it’s our other new project. Something that builds on what we learned from Stardew. No formal announcement for a while.”

…and then corrected the spelling of the original tweet, which I appreciated: “Also *peek, damn it”. It’s only ever the tweets with spelling or grammar errors that get traction, eh? That said, I have a soft spot for “sneak peak” specifically: